Smash (when defeated as a mid-boss and inhaled), Burning (from bullets), Stone (from stars)

Mid-boss, Boss
Master Hand is a major boss character in the Super Smash Bros. series, appearing in all five titles as some kind of obstacle to the player (most commonly as a final boss). Although he is generally exclusive to the Super Smash Bros. series, Master Hand managed to make a surprise appearance as a mid-boss in Kirby & The Amazing Mirror, granting the rare Smash Copy Ability to Kirby when inhaled. Also, Master Hand and his left counterpart, Crazy Hand, appear much later as the bosses of the penultimate level of the game. He is the main source of Smash in the game.

As the eighth bosses, Master Hand and Crazy Hand guard the Mirror Shard of Candy Constellation. Defeating them after the other shards have been collected allows Kirby to enter the true final level: the Dimension Mirror.

The moves that Master Hand uses are about the same as they are in the Super Smash Bros. games, and bear similarities to Wham Bam Rock's moves in Kirby Super Star and Kirby Super Star Ultra.

As a mid-boss, Master Hand has a total of four attacks, each of which are vaguely based off his moves from the Smash Bros. series. These attacks are pounding the ground with his fist, shooting out flaming bullets, punching Kirby, and forcefully seizing him. As bosses, Master Hand and Crazy Hand retain some of their tag team-based moves from Super Smash Bros. Melee, such as clapping and fist-pounding. Not counting their combination attacks, Crazy Hand employs the same exact moves and tactics that the regular Master Hand uses.

In Super Smash Bros. for Nintendo 3DS and Wii U, Master Hand reappears again in Classic Mode. However, if the player chooses an intensity higher than 5.0 and chooses to fight Master Hand and Crazy Hand, the fight is cut short upon dealing enough damage to the duo, as Crazy Hand will dematerialize while the entity named Master Core bursts out from Master Hand's glove. Master Core is made up of black particles called "Swarm," which can form into various objects/entities. These entities are Master Giant, a gigantic humanoid; Master Beast, a demonic dog-like creature; Master Edges (Master Sabres in PAL regions), a giant sword-like creation with four smaller variants; Master Shadow, a shadow clone of the player; and Master Fortress (in the Wii U version only), an eerie fortress that the player must trek through and destroy.

In Super Smash Bros. Ultimate, there are seemingly hundreds of Master Hands shown during the opening to World of Light, in which Marth comments that each of the fighters would need to take down about ten. The Master Hands all dissolve into energy and feed said energy into their master, Galeem, who obliterates every fighter except Kirby, thanks to Shulk seemingly warning him in advance. Master Hand can be seen on the world map from time to time, destroying bridges that players would use to easily find certain items. 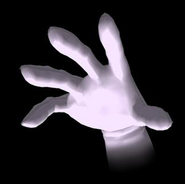 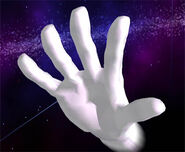