Kirby Wiki
Register
Don't have an account?
Sign In
Advertisement
in: Items, Articles with non-canonical information, Items in Kirby's Return to Dream Land,
and 6 more
English

Strengthens and transforms its wearer

The Master Crown is a seemingly malevolent item in the Kirby series, appearing in Kirby's Return to Dream Land.

The Master Crown is known to change its overall shape throughout the course of the game. It comes in four forms:

The Master Crown was first seen when Kirby, Magolor, and co. entered Halcandra via the Lor Starcutter, resting atop Landia's head and remaining dormant until the battle against Landia. After Landia's defeat, the Master Crown falls from its spot onto the ground, only to be seized by Magolor. Magolor then reveals that he fought Landia himself for the crown, but he lost, later fleeing to planet Planet Popstar— this is likely why Landia attacked the Lor Starcutter on sight when he returned to Halcandra. The crown transforms Magolor into a ghastly, jester-like creature as he makes his move to conquer the entire universe, starting with Popstar.

When Magolor is defeated, the Master Crown manifests itself as him. In Main Mode and The Arena, this entity is Magolor's third form; in Extra Mode and The True Arena, however, Magolor Soul is created. After defeating this villain, the Master Crown shatters, releasing its grip on Magolor. He then fades away, going to a dimension beyond space and time.[1]

In the Team Kirby Clash sub-game, Landia serves as the opponent in Quests 5 and EX. It wears the Master Crown in both battles. This is because its 3D model was reused from Kirby's Return to Dream Land.

The Dark Lord Void Termina uses two swords almost identical to the Ultra Sword used by both Kirby and Magolor, with a hilt very similar to the Master Crown in its first phase. In its third phase, it also creates/invokes a light blue image of the Master Crown to fire lasers at the Star Allies Sparkler, or, in The Ultimate Choice on Soul Melter level, a near perfect replica and on Soul Melter EX up to four Master Crowns, with which he shoots out a giant laser beam to attack Kirby and his friends.

The Master Crown manifests itself as Magolor's final form.

The Master Crown manifests itself as Magolor Soul.

Void Termina summons a replica of the Master Crown to attack Marx. 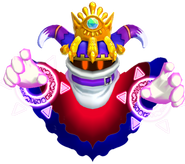 The Master Crown atop Magolor's head 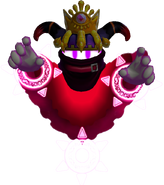 The Master Crown as it appears when Landia splits