Mario Kirby Masterpiece is an educational video only released in Japan, and stars Mario and Kirby, both on their own separate adventures. It is aimed at teaching young children Kanji/Chinese characters. It was released in 1993 (the same year Kirby's Adventure and Kirby's Pinball Land was released, thus the cover features art from those two games). In this video, Kirby is voiced by Mayumi Tanaka.[1] This was also the first time that the Kirby series had a crossover with another Nintendo series -- Mario.

Mario's story starts when the treasure of a school has been stolen by the "mysterious thief W." Princess Peach informs Mario of this incident and he goes looking for the thief (who is soon identified as Wario). Mario becomes Rabbit Mario, and then he tracks down and defeats Wario, whose plane tumbles down to the ground. Everyone (except Wario of course) is pleased with Mario's victory. The treasure was retrieved and given to its rightful owners, though Mario is shocked because when Princess Peach opens the briefcase the treasure was in and discovers that the treasure was only school books.

Kirby's story starts when he finds a puppy who has lost his mother. Kirby finds out that the dog's mother has been captured and is now trapped in Castle Dedede, and sets out to go find her. After being told by the moon that King Dedede was the culprit, Kirby searches for him and finds out that the king was only taking care of the mother's hurt paw. With a sigh, Kirby heads back home. 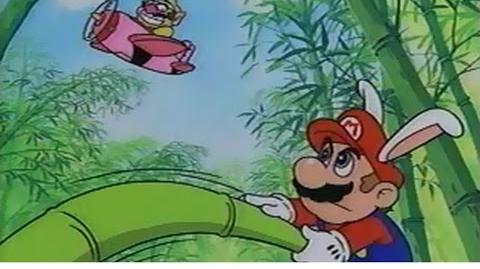 The video teaches how to read.

Kirby sets out to find the puppy's mom.

They pass an insect.

Kirby and the puppy rest on the shore.

The moon describes what happened.

The team ventures through Castle Dedede.

They reach the king's door.

The puppy is reunited with his mother.

A happy ending.
Add a photo to this gallery

Retrieved from "https://kirby.fandom.com/wiki/Mario_Kirby_Masterpiece?oldid=326779"
Community content is available under CC-BY-SA unless otherwise noted.