Mariel is an enemy in the Kirby series, debuting in Kirby's Dream Land 3. It yields no Copy Ability when inhaled.

Mariel is a creature resembling a spider, its body is a black spherical shape with four long skinny legs that it can retract from its own body, as well as tiny white eyes. In Kirby 64: The Crystal Shards, it appears to be less solid, as its body looks more fuzzy like that of a tarantula.

Mariel makes its first appearance in this game. When Kirby (or Gooey) comes close enough, Mariel will open its eyes, extend its legs, and walk towards the hero. Mariel is unique in the fact that it will give Kirby or Gooey damage if he swallows it, similarly to what Whispy Woods' poison apples will do to Kirby if he tries to eat them.

In its second and latest appearance, Mariel behaves the same as it did in Kirby's Dream Land 3. 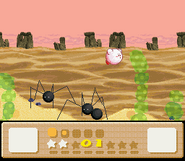