Bonkers
Mallow Castle is the second level of the sub-game Dyna Blade in Kirby Super Star and its remake, Kirby Super Star Ultra. It is set after Peanut Plains and precedes Cocoa Cave. The Switch for the first Trial Room is located here.

Mallow Castle is a large, pink and white castle in Dream Land. It is located next to Peanut Plains. The outside of the castle has large tree-like topiaries and a large fence and the inside has golden floors with white walls. Kirby begins the level outside the castle and then works his way inside, but then uses a Warp Star to break out back into the castle gardens. The Wheel ability is later provided at one point to get through the remaining grounds quickly. At the end of the level is the mid-boss Bonkers. In the final section of Mallow Castle, Kirby can pound down a peg which demolishes the castle and reveals a door leading to three 1UPs.

In the second room, go to the second floor. Obtain Mirror from the nearby Simirror. Use Mirror/Reflect Force to activate the Bomb Block chain, revealing a door. Enter the room. The switch can then be pressed, granting access to Trial Room 1.

Flying around the outside of Mallow Castle 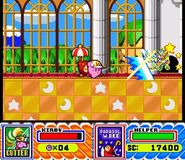 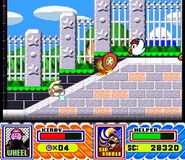 Kirby rolling through the castle courtyard 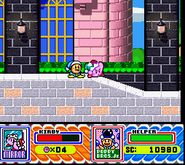 Kirby and his Helper in a long passageway

Mallow Castle in the remake

The well-kept gardens of the castle (remake)