The first appearance of Makiko Ohmoto's voice as Kirby is in Super Smash Bros. for the Nintendo 64, as Kirby was not yet voiced by Ohmoto in Mario Kirby Masterpiece. However, Kirby 64: The Crystal Shards marks her first time voicing Kirby in a Kirby game. 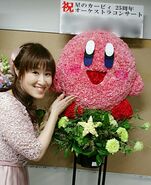 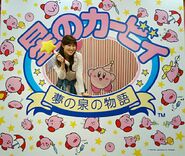 Makiko Ohmoto at the Kirby Café