Magical Sweeper is a pinwheel-like machine whose body constantly changes bright, rainbow-like colors and constantly gives off a glowing colored aura, and it has a white center with a black symbol.

Magical Sweeper is a rare enemy that mainly exists in jungle areas and can be found in the Battleship Halberd and other mechanical places. It moves along the ground and occasionally stops to open up and shoot spherical colored projectiles. It can shoot one big projectile, three medium-sized ones, or about twenty small ones machine-gun style. It resists the Zap element. 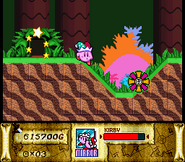