Draws a magical line that helps Kirby move in his ball form.
The Magical Paintbrush is a mighty artifact owned by the evil witch Drawcia. It is initially used as a weapon by her, but winds up helping Kirby after the opening cutscene. Its first and most significant appearance was in Kirby: Canvas Curse. The tremendous magical power of the Magical Paintbrush is revealed when Drawcia came to Dream Land one day. She used it to turn Dream Land and every inhabitant into a painting- except for Kirby, who had been taking a stroll. Kirby then realizes the evil that was done to the land and follows Drawcia through a vortex that leads to her realm. There he fought against Drawcia but he just could not keep up with the Power of the Paintbrush. The witch turned Kirby into a ball and retreated: However, Kirby managed to touch the Magical Paintbrush, causing it to transport to the player in a ray of light. From then on, the paintbrush assists Kirby on his quest to challenge Drawcia and undo the harm she inflicted upon Dream Land.

The Magical Paintbrush's powers primarily revolve around paint, but the enchanted artist's tool can also perform other functions. Drawcia uses the brush to turn all of Dream Land into paint at the beginning of the game and then uses it to turn Kirby into a ball, feats that such powerful foes such as Nightmare, Marx, and even Magolor were incapable of doing. While Kirby is using the brush, however, its powers are much more limited; the paintbrush (which is not generally visible outside of cutscenes) is largely capable of drawing the rainbow lines which guide Kirby on his quest to smite Drawcia. The paintbrush can also impede Kirby's enemies by stunning enemies, leaving them vulnerable to Kirby's direct attacks.

As is evident, the Magical Paintbrush is capable of more than just changing the shape of a creature. It can turn living beings into paintings and vice-versa. 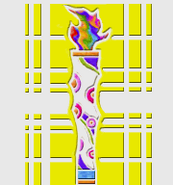 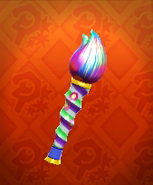