80 HP
Mace Knight is an enemy in the Kirby series, debuting in Kirby's Adventure. He grants no Copy Ability when inhaled. Mace Knight is one of the Meta-Knights, and serves under Meta Knight himself.

Mace Knight dons purple armor, with golden shoulder pads and blue shoes. He carries around a flail nearly as big as himself, holding it by the chain.

Mace Knight gangs up on Kirby with the rest of the Meta-Knights, appearing as a recurring mid-boss. Meta Knight gives the command upon seeing Kirby, then vanishes, as Mace Knight and the others appear in a surprise attack. Mace Knight swings his flail over his head a few times before thrusting it forward. Then he takes a few steps and repeats. Sometimes, he will swing his flail early if Kirby gets too close. Occasionally, upon spawning, Mace Knight will swing his flail over his head crazily as he dashes across the room. Upon reaching the end, he turns around and proceeds.

Mace Knight behaves in the same way as before, but slightly more independent; he spawns without waiting for a command. His attacks are the same, as well. He is weak to the Zap element.

Mace Knight is also a key character in Revenge of Meta Knight, having his own dialogue throughout the subgame. He is one of the crew-members that watches as Kirby gradually wrecks Halberd. Despite his witty conversations with others, he also attempts to stop Kirby as he approaches the room where he will encounter Meta Knight, accompanied by others.

His role as a crewman of the Halberd is watching the radar for any suspicious objects; it is shown in one of the conversations with the crew when Kirby disappears into the secret area of the clouds, with the line, "Ack! Kirby's disappeared from the radar!" Strangely, in the Meta Knightmare Ultra credits, he isn't seen with Captain Vul, Axe Knight, Sailor Waddle Dee, and Meta Knight in a screenshot with the Halberd crew or in the opening credits.

On the Halberd, there is a secret room containing a secret stash of food and 1UPs. If succeeding in finding the room, he accidentally notifies his superiors about the secret stash. Kirby can proceed to replenish himself with this, much to his dismay.

Mace Knight appears twice in Kirby Mass Attack. He first appears in the Strato Patrol EOS sub-game alongside Javelin Knight after they emerge from the Halberd. Mace Knight attacks by swinging his flail and moving around. His flail also blocks all of Kirby’s shots. He secondly appears in Kirby Quest in Chapter 3 alongside the rest of the Meta-Knights.

In Meta Knightmare Returns, Meta Knight can call upon Mace Knight, along with the other the original Meta-Knights from Kirby's Adventure, to perform his strongest special attack, Meta Knightmares, in which they slash through any and all enemies on screen with their respective weapon. Mace Knight also appears celebrating in the sub-game's ending.

Quotes (from Revenge of Meta Knight) 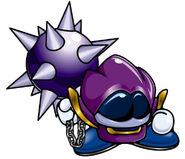 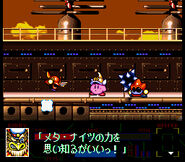 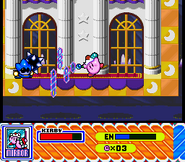