N/A, Cutter in the anime

Lovely is a recurring enemy in the Kirby series. She is an effeminate yet wild orange flower who is always pleasantly smiling. Her appearance belies her true intentions however, as she will snap at Kirby whenever he gets into her range. Lovely first appeared as a common enemy in Kirby Super Star. Not counting Kirby Super Star Ultra, she has most recently appeared as a cunning monster in the anime.

Lovely is a small, feminine looking flower. She has a yellow face surrounded by five orange petals. Behind the petals are five more gold colored petals, which are slightly larger than the ones in front of them. She is always wide-eyed and her stem is made up of several green bead-like orbs. She has a multitude of grassy leaves surrounding her stem.

In the anime, her design is slightly altered. Her face is now yellow and her outer petals are now a light orange. Her stem is now as a regular stem would appear, and no longer made up of small beads. Her frontal petals also have small reddish-colored markings on them. In her villainous transformed state, Lovely's face becomes purple, her eyes turn red and triangular, and she now has green eyelids instead of pink ones. Her back petals are now replaced with shining golden blades and her leaves turn into sharp, whip-like vines, and she grows small fangs with light purple lipstick around her mouth. She is the same size as Whispy in this form, where her original form was only the size of a normal flower.

This was Lovely's first appearance. She would joyfully smile while watching Kirby right up until the moment that she strikes. She winks and retreats just before she lunges at Kirby, so the attack can be apprehended. She attacks by enclosing her petals around Kirby similar to a venus flytrap. She is mounted to the ground and can't be inhaled, so she gives no ability. To make matters worse, Lovely is sometimes mounted to ceilings. This makes her harder to both avoid and attack. She is the tallest regular enemy in the game, and rivals the height of some mini-bosses as well.

During Revenge of the King Mode in Kirby Super Star Ultra, Lovelys are replaced by shadowy, rose-like enemies called Roselys. These roses have higher health than the regular Lovely and extended range.

Lovely later appears having found a Star Piece in Kirby's Super Star Stacker. Lovely refuses to give it up and bashes Kirby and his friends. Kirby and her soon engage in a fight over the piece, which results in Lovely being defeated and Kirby and the gang running off with the Star Piece.

She serves as the third opponent in the game, coming after Poppy Bros. Jr. and before Knuckle Joe.

Lovely appears as a collectible keychain in Kirby: Triple Deluxe.

In the Kirby: Right Back at Ya! anime, Lovely makes an appearance in episode 27, The Flower Plot as an evil, cruel and manipulative monster, However she isn't inherently evil at first (even she herself never realized that), and actually started off as a kind and innocent flower.

In the beginning, Lovely is a flower that grew right in front of Whispy Woods inside his forest. Whispy immediately identifies her as being a special kind of flower, because she is the only flower in the entire forest. With the help of Tiff, Tuff and Kirby, he protects her from storms and tries his best to help her thrive, essentially falling in love with her in the process. But their efforts were in vain and she was captured by King Dedede one night.

After Tiff and Tuff get Lovely back, Whispy is thrilled to see her again. But what they don't know is the plant was enhanced and brainwashed by Nightmare Enterprises to drain Whispy's energy and kill him. Lovely grows closer to Whispy and begins to turn him against his old friends. When confronted, Lovely absorbs Whispy's life force and he begins to wither. As Kirby and his friends witness this, Lovely transforms into her voluptuous monstrous form. Whispy is so allured by Lovely that he is immobilized by love, and refuses the gang to interfere. He later regains his senses once it occurs to him how dire the situation is and that Lovely will eventually condemn the rest of the forest. With encouragement from Whispy, Kirby is able to inhale one of the golden blades surrounding her head making him Cutter Kirby. Kirby continues to battle Lovely and eventually severs her roots with his blades, mortally wounding her. Whispy is heartbroken, but Lovely vows to return, saying that next time she wouldn't be a monster. The next time the three visit Whispy, it is revealed that Lovely kept her promise, and has returned (in her regular form) along with dozens of others.

In the Dub, Lovely is voiced by the veteran voice actress Lisa Ortiz, and in Japanese, she is voiced by Yuko Mizutani.

In her first form, Lovely is similar to her in-game counter part, she is a small, cute flower-liker creature, but does get some changes, her face is now yellow and her outer petals are now a light orange. Her stem is now as a regular stem would appear, and no longer made up of small beads. Her frontal petals also have small reddish-colored markings on them.

In her second form, Lovely's face becomes purple, her eyes turn red and triangular, and she now has green eyelids instead of pink ones. Her back petals are now replaced with shining golden blades and her leaves turn into sharp, whip-like vines, and she grows small fangs with light purple lipstick around her mouth.

Although Lovely is not one of the more powerful monsters, she is very dangerous. In her first form (before being converted into a monster) she is able to withstand powerful blows from a storm, but her main ability in this form is absorbing the life force from her targets from either her roots or her vines, causing her to grow in size. She can seemingly transform into her second form at will after stealing enough energy.

In her second form, Lovey retains her ability to absorb life force from her enemies from her vines, but this time she can use these vines to bash and stab her enemies. She now has a set of sharp golden blades as her back petals, for which she can rotated and fire them like boomerang projectiles in rapid succession. They will attack her targets at will, homing in on them, then return back to her. She can also use her front petals to block her face from attacks like a shield. 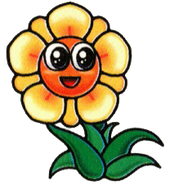 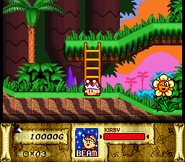 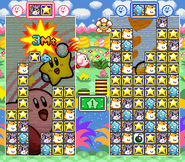 Lovely turning into her monster form.