The Lor Starcutter is an ancient ship that can travel through the cosmos. It debuts in Kirby's Return to Dream Land, where it crashes on Dream Land shortly after emerging from a dimensional rift in the sky, prompting Kirby and company to stop what they're doing and investigate.

The ship is high-tech in a blue-white color scheme. Its hull is shaped like a seafaring ship with a keel at the bottom and three oars on each side, and a topsail on a single mast. On its aft are two great wings flanking its engines.

As a boss in Another Dimension, the Lor Starcutter has a dark purple and blue color scheme.

As a boss in Extra Mode, the Lor's shape is unchanged but it has a red-orange and black color-scheme instead of a dark purple and blue one.

According to Magolor, the current owner of the ship, the Lor Starcutter is an ancient vessel that was crafted by the ancients, people of the past who made legendary treasures and pieces of technology. The ship was apparently crafted using an “incredible power.” The ship has the ability to travel throughout space and time by creating dimensional rifts. The Lor Starcutter was set down in a sacred resting place in Halcandra, a planet in Another Dimension, and the ancients entrusted Landia to guard it and some other artifacts they created. The ship was uncovered by Magolor, who repaired and upgraded it, though in truth he had stolen it. Also according to Magolor, the Lor Starcutter is apparently sentient, as he stated that there’s legends that say that the ship has a mind of its own. This is evidenced at the end of Kirby's Return to Dream Land, where the Lor Starcutter and Landia return to rescue Kirby and friends, despite Magolor having been defeated and not there to pilot it. Magolor also implies that the Lor may have the ability to speak, although there is no evidence to that.

In Kirby's Return to Dream Land, the Lor Starcutter serves as the main objective for the majority of the game. One day, while Kirby, King Dedede, Bandana Waddle Dee, and Meta Knight are living peacefully, they notice a bright light in the sky, as a dimensional rift then opens with the Lor Starcutter plummeting from it. In the process, it loses all 120 of its Energy Spheres, along with its oars, wings, emblem, and mast. It then crashes onto the ground, with Kirby and friends running to it to investigate. In the ship, they meet Magolor, the captain, who is upset that the Lor Starcutter was destroyed. Kirby and friends then offer their help to gather all the parts of the Lor, as Magolor then thanks them and shows them where the five major parts are located. The heroes then set off to gather the parts and repair the Lor Starcutter.

After Kirby and friends had gathered all of the parts, Magolor thanks them by taking them to Halcandra for a trip. However, once they arrive there, the Lor Starcutter is struck down by Landia. Magolor is once again distraught, but Kirby and friends offer to defeat Landia for him, and set off to do so.

The heroes manage to take down the four-headed dragon, and jump and cheer in joy. However, Magolor slowly descends from the sky, applauding their victory. He then snatches the Master Crown and places it on his head, transforming himself. He then reveals his true motives. He had originally stolen the Lor Starcutter from its resting place and had used it to fight Landia in an attempt to steal the Master Crown so he could conquer the universe. Despite his efforts, Landia overpowered the ship, and Magolor had to make an emergency landing on Planet Popstar. He then sets off to conquer the universe, with Kirby and friends chasing after him by riding on Landia.

After the heroes had defeated Magolor for good, Another Dimension begins to collapse on itself. The heroes struggle as gravity is lost, but before they could be trapped in the collapsing dimension, Landia and the Lor Starcutter return to rescue them. The Lor then reopens the dimensional rift to Planet Popstar, and everyone flies through it. After dropping off the heroes back in Dream Land, the Lor Starcutter opens another dimensional rift, and it and Landia fly through it as the heroes wave goodbye.

The Lor Starcutter is fought as a boss in Another Dimension, after Magolor takes control over it. It can fire dark stars from its emblem in either a stream or fan pattern (similar to Nightmare's attacks), throw its twin wings like boomerangs, fire its oars one at a time, similarly to spears, and project a tornado from its mast to an edge of the screen.

When the Lor is at half HP, its attacks become faster and more dangerous. Lor will encase itself in a sphere that looks similar to an Energy Sphere's sphere, charge into the player(s) at full speed, then appear from behind and fire its stars. The wing and oar attacks become faster. It can now rotate in a full circle during its tornado attack. It projects blue and red orbs with the kind of shielding seen covering Energy Spheres and its individual parts earlier, in both straight and homing patterns, respectively. The red orbs home in based on where Kirby is at the time of firing.

In Extra Mode, the Lor Starcutter EX uses the shield projectile and ramming attacks from the start of the fight, fires more stars, and the attacks come even faster. It also uses new yellow orbs strike from the background in conjunction with the regular red and blue ones. It can also now use both red and blue orbs at the same time. The tornado attack is much larger, the Lor can change directions when moving in a full circle, and sometimes stops and restarts quickly when moving up and down the screen. It can also use both of the wings to attack now, instead of just one at a time. Finally, the Lor can hover in the background (hence being invulnerable) while firing a stream of stars at the player (similarly to Zero), and it performs a random follow-up attack after its ramming attack.

The Lor Starcutter makes a few minor appearances in Kirby's Dream Collection Special Edition. The interior of the Lor Starcutter can be seen during the intro of the Challenge stages as Magolor talks to the player. It also appears at the end of the credits to pick up Magolor.

The Lor Starcutter can sometimes be seen flying around in the overworld map of Far-Flung - Starlight Heroes in Kirby Star Allies. It also appears as part of Magolor’s moveset, where it is used in his Team-Up Attack Magoloran Launch. Magolor holds a shrunken version of it above his head, and the other players can jump onto it to ride it. It enlarges each time someone jumps onto it, and once Magolor uses the attack, he launches the Lor Starcutter forward, attacking any enemy in the way. Additionally, it appears in the end card for Magolor, Taranza, and Susie in Guest Star ???? Star Allies Go!.

The Lor Starcutter appears as an unlockable trophy in Super Smash Bros. for Wii U that can be unlocked by playing as Toon Link in Target Solo Blast in Stage 2 and scoring at least 120,000 points in a single game.

The ship in Kirby's Return to Dream Land’s intro

Outside of the Lor Starcutter

Magolor Summoning Lor Starcutter
Add a photo to this gallery 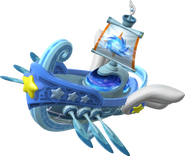 Kirby: Planet Robobot
Add a photo to this gallery
Retrieved from "https://kirby.fandom.com/wiki/Lor_Starcutter?oldid=325326"
Community content is available under CC-BY-SA unless otherwise noted.