Lololo & Lalala (Fololo and Falala in the English dub of Kirby: Right Back at Ya!) are long-time bosses in the Kirby series. In the anime, Kirby: Right Back at Ya!, the two serve as Kirby's friends and allies. Their relationship with each other is not stated in the games. Lololo & Lalala originated from Lolo and Lala, characters from an earlier HAL game on the MSX computer called Eggerland Mystery, which would later grow into a short-lived series.

Lololo & Lalala look exactly like each other, with spherical bodies that peak up at the back to form a stubby tail, deep violet eyes (dark blue in recent artwork), and identical pairs of small rounded white mittens and shoes. The only difference is that Lololo is blue while Lalala is red (pink in Kirby: Right Back at Ya!, 3D Games and certain artwork) with a yellow bow.

They have no visible mouths, but are capable of speaking in both Kirby's Avalanche and in the anime. It is worth noting however that their Eggerland counterparts have mouths in some Eggerland box art and sprites.

In Kirby's Blowout Blast, both are given minor redesigns; Lalala has feminine eyelashes, and their arms have been recolored white instead of their body colors (something that coincidentally happened in their Kirby Super Star and Kirby's Avalanche sprites). Lololo's eyes are blue, while Lalala's eyes are a deep violet. And their Revenge form's shoes and gloves are now white.

Lololo & Lalala are found within (and are the namesake for) Castle Lololo. They are one of Dedede's servants he trusted to guard one of the Sparkling Stars. Lololo is first seen halfway through the level without Lalala, and acts as a mid-boss. He is found in a room with doorways at the end and four increasingly longer ledges. He steps out of each doorway pushing a box and kicks it at Kirby before retreating back and repeating the process. The boxes are to be used as projectiles against him and is defeated in 3 hits.

At the end of the level, Lololo is joined by Lalala as a tag team boss in a room with four floors that extend across the screen. Doorways (that Kirby can't enter) lie at each end. Only portions of the floors that are thin can be jumped up and down through. The duo appear at separate doors and march to the other side pushing a box. Once more, Kirby must inhale their boxes and fire them back, Lololo, and now Lalala, are defeated when awarded three hits each. The battle ends once both of them fall. They're fought again at Castle Dedede.

The boxes pay homage to the Eggerland series, where Lolo (and sometimes Lala) had to push boxes in the maze puzzles.

In the Extra Game, they move at an increased speed. In his first encounter as a mid-boss, Lololo will alternate between throwing Gordos and blocks.

In Spring Breeze, Lololo & Lalala return with similar behavior and tactics used in their boss fight in Kirby's Dream Land, but there are several differences. Lololo is no longer a mid-boss and has since been replaced by Mr. Frosty. The thin floors that Kirby can jump through now cannot be stood on. They occasionally push Gordos as well as boxes, similar to their Extra Mode versions in Kirby's Dream Land, but have dramatically reduced speed. The number of floor levels has been reduced from the original's four to three. Kirby's Dream Land was black and white, but this time it's clear that the boxes both Lololo and Lalala push are the Emerald framers from Eggerland, since they are green. They are defeated after two hits each, making this their weakest appearance so far.

Kirby Super Star Ultra is the first game where they have individual walking sprites that depend on whether they are pushing framers or not.

Rather than being fought in Castle Lololo, they are found in a castle in Float Islands, which is the new Stage 2. The castle is not directly referred to as Castle Lololo, but can be inferred as such.

In Revenge of the King, Lololo & Lalala return as Lololo & Lalala's Revenge. Like the regular duo, these two try to overwhelm Kirby by pushing around their boxes. However, as with the other bosses in the sub-game, their battle's difficulty has been raised. The duo is now much faster, hastily speeding down the arena walkways instead of casually strolling around like in the previous face off. They can also push Gordos, and have four rows in which they can move through instead of three. Gordos also may appear by themselves. This battle is very similar to the Extra Mode version of the Lololo & Lalala battle in Kirby's Dream Land. Defeating the pair after 3 hits each grants 50600 points.

Their board is even more reminiscent of the Eggerland series than seen in past games. They do exactly the same thing as in previous Kirby games, only now Blocky (who is notably based on Rocky from Eggerland) acts as a barrier and tries to prevent Kirby from hitting them. Like in other games, Kirby has to defeat both of them to progress, and they now need four hits each to be defeated.

While they no longer push Gordos, Kirby must be careful not to fall in either of the trapdoors that they travel into and come out of, making this the only game in the series where it's possible for Kirby enter the doors.

Further, destroying all of the heart-patterned blocks reveals a Treasure Chest. When hit, it rewards Kirby with bonus points in the form of a key, illustrating another reference to the Eggerland series.

While not encountered in the main story, the pair appears as stage hazards in one of the Kirby Fighters stages alongside the other Spring Breeze bosses (except Whispy Woods). This invariably marks their first appearance in a 3D game. Additionally, the pair appear in the form of a collectible keychain (using their Kirby's Dream Land sprites) that Kirby can find in his journey.

In Kirby Fighters, the Kirbys must fight around Lololo & Lalala as they walk through the arena pushing various objects, such as Gordos, Blue Boxes, and their trademark green framers. Even if the obstacles they're pushing is broken, the two themselves still cause damage if the collide with one of the Kirbys. The two can be freely attacked as well, and temporarily defeated.

The arena they appear in is based off the Float Islands boss stage in Kirby Super Star Ultra. The music that plays is the 8-bit version of Castle Lololo's music heard in Kirby's Dream Land. This stage appears in the downloadable Kirby Fighters Deluxe sub-game as well.

Lololo and Lalala reappear in the Kirby's Dream Land-esque video game, Kirby's Blowout Blast, making their first appearance as a boss in six years. Though their battlefield has changed, their attacks are the same.

Lololo is first encountered alone in stage 1-4; this is the first time Lololo has been fought alone since his debut. He is defeated after four hits. When he has lost half his health he will start shoving boxes forward angrily, similar to his kick attack in Kirby's Dream Land. Like Kirby Mass Attack, the doors will open and close when he nears them, though Kirby still can't enter the archways. His revenge form appears in 1-4 EX, and gains a new attack including red boxes that will trail fire and Shotzos on top of Star Blocks and is defeated after 5 hits. He re-appears with Lalala in stage 3-5, and because they share a heath bar, they will become agitated after 3 hits to the respective, though the one that was hit will have an animation. If they became agitated while either is pushing an object, they'll shove it away. In 3-5 EX Lalala's Revenge appears with Lololo's Revenge along with Gordos on some of the platforms they're each defeated after 4 hits. They reappear in the Secret Path.

In the episode The Fofa Factor, it is revealed that they were originally one monster known as Fofa (Lola in the original Japanese), but he was deemed as useless by both Nightmare and N.M.E. Sales Guy as all he could do was float and was unwilling to harm anyone. He was to be sold to King Dedede, but NME Salesman decided to have Slice n' Splice split him in two beforehand to double his price, and Dedede swallowed the scam passed off as a two-for-one deal. It didn't take long for Dedede to think the two of them useless as well, and he threw them out and told Sir Ebrum and Lady Like to look after them. This occurred a short time after Tiff's birth and she did not know about their origins until the events in The Fofa Factor. Fololo and Falala did not know about their origins as well, as they were sent directly to King Dedede right after being split before they even woke up.

They are rarely seen apart and would never split up, even when under a direct order from King Dedede himself. The one time that they are seen apart is when they split up to hide Kirby from Slice n' Splice, King Dedede and Escargoon, who are chasing them around Castle Dedede, after Kirby was split in two by the monster.

For the most part, largely because they can fly, their main role is to pass on messages to people, or to find people - usually Tiff, Tuff, Kirby, or any combination of the three. Sometimes they will help Kirby and friends by running interference. For example, they distracted King Dedede and Escargoon for Kirby to obtain the Cutter ability and defeat Lovely before the monster can drain the life force out of Whispy Woods, thwarting Dedede's plans to cut down Whispy Woods Forest.

Lololo & Lalala's appearance are based on their counterparts in their earlier appearances, Lolo and Lala in HAL's Eggerland series. The original concept of the characters in the first title, Eggerland Mystery for the MSX in 1985 looks dissimilar to their appearances in Kirby now, but their appearance changed subtly throughout the Eggerland series' history up to the final title Revival! Eggerland for Windows in 1996, with the characters losing hair on their heads (seen in certain Japanese boxart only), gaining their stubby tail and trademark white gloves, to the point where the similarity is uncanny.

To put the time scale into perspective, Lololo & Lalala are first featured in Castle Lololo of Kirby's Dream Land, released in 1992 for the Game Boy (in the Kirby series).

In the Eggerland series, the main setting is in Eden Land, named after King Eden, King Egger's apparent ancestor. Lolo is the blue protagonist perpetually trying to save Lala, royalty of Eden Land and his pink significant other from the evil King Egger. Lala is an alternate playable character in Adventures of Lolo 3, the only title where she is not kidnapped. Apparently they had a child named Lulu (smaller, colored yellow) in Lolo's Great Adventure in 1994. King Egger's main motivation for his evil-doing is his jealousy of Eden Land's beauty. The entire premise is not too far off from Mario, Peach, and Bowser respectively, but the titles feature puzzle-solving from a top-down perspective.

Kirby: Right Back at Ya! (Lololo) 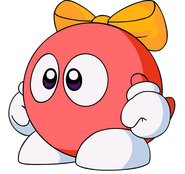 Kirby: Right Back at Ya! (Lalala) 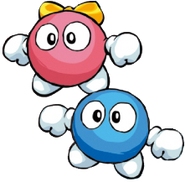 HAL Laboratory 40th Anniversary
Add a photo to this gallery 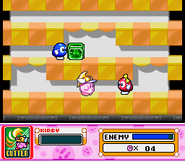 Kirby: Right Back at Ya! - Kirby's Duel Role

Kirby: Right Back at Ya! (Lololo)

Kirby: Right Back at Ya! - The Kirby Derby - Part I and II 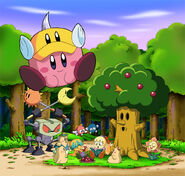 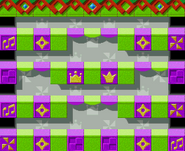 Retrieved from "https://kirby.fandom.com/wiki/Lololo_%26_Lalala?oldid=331132"
Community content is available under CC-BY-SA unless otherwise noted.