Light is a Copy Ability in the Kirby series, debuting in Kirby's Adventure.

Light illuminates dark rooms. It doesn't damage or affect any enemies, and can only be used once. There are only two dark rooms in the entire game, to which this ability has an actual effect; using Light in the second of these dark rooms, located in Stage 6 of Grape Garden, reveals an otherwise hidden door if the player backtracks. Light can be obtained or used in lit areas, but it doesn't do anything besides expend the ability. Light is obtained from the Cool Spook enemy.

Light hasn't appeared in any other games, likely due to its function being replicated by other means, such as Spark Kine, Bomb + Spark, Candles, and Fire and Spark's abilities to illuminate areas around them. 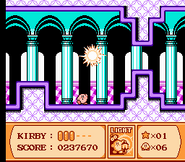