Lickeur[1] is a large enemy in the Kirby series, debuting in Kirby's Epic Yarn.

Lickeur is a large, triangular blob made of striped purple yarn. It has a giant mouth with a massive tongue, five orange circles on its back, and three magenta button eyes.

In the cutscene "A Close Call," Kirby and Prince Fluff discuss Yin-Yarn's villainy. While explaining that the sorcerer divided Patch Land and created monsters, Fluff is ambushed by Lickeur. It grabs the prince with its tongue and bounces him up and down, intending to devour him. Kirby jumps over the creature, transforms into his Weight form, and crushes the creature. Lickeur drops a strand of magic yarn that stitches Grass Land to Quilty Square, causing Fluff to hop up and down with excitement. The two heroes then embark on their adventure to fix Patch Land.

Lickeur never appears in-game. In the Kirby's Extra Epic Yarn sub-game Slash & Bead, Meta Knight can obtain a Mat of Lickeur if he achieves an A Rank in Stage 4.

Lickeur's name is derived from the word "lick," referencing its propensity to use its tongue for combat. 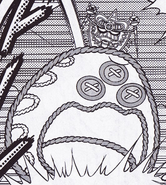