Leaf
Leafan is an enemy in the Kirby series, debuting in Kirby's Return to Dream Land. It yields the Leaf ability when inhaled.

Leafan is a small stumpy, brownish-red plant creature with a roundish body with beady eyes and six large green leaves fanning out from the center of its body. It has a white mask-like marking around its eyes and has three leaves below it that it used to stand with.

Leafan floats down from the sky like Bumber from Kirby 64: The Crystal Shards and, upon landing, will start to launch seeds out of its head. Sometimes, Leafans can be found already sitting on the ground. If Kirby touches a seed, he'll take damage.

Leafan leaps into the air and floats back down after each seed attack. Bulby, another Leaf-yielding enemy in Kirby's Return to Dream Land, does not appear in these games, making Leafan the only source of the Leaf ability (aside from Copy Essences). 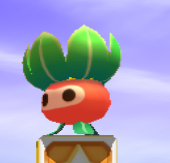 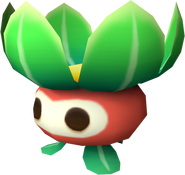