A crown of leaves with an emerald with a golden bezel on the forehead. The crown also has two thin withered leaves on the back.

Leaf is a Copy Ability in the Kirby series, debuting in Kirby's Return to Dream Land.

Leaf focuses on throwing out leaves to deal damage. Some leaves twirl around, while others are fired more directly. Leaf is capable of cutting ropes. Leaf also has a special guard that makes it invincible to all attacks except Magolor's Black Hole. Leaf can be obtained from the Leafan and Bulby enemies.

Leaf is mostly unchanged from its appearance in Kirby's Return to Dream Land. Some of its moves were modified. Leaf is obtained from Leafan.

In Kirby: Planet Robobot, Leaf can also be obtained from the Olimar, Toad, and any Animal Crossing amiibo.

Kirby's Return to Dream Land (with Sword, Spear and Beam) 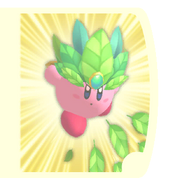 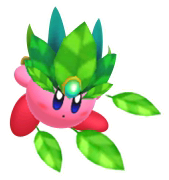