Laser (most games), Beam (Kirby Super Star and its remake only)

Laser Ball is a common enemy in the Kirby games. It is an orange ball with eyes, which will try to attack Kirby by firing lasers at him. Similar to most other enemies, Laser Ball also sometimes comes in other colors. Its first appearance was in Kirby's Adventure, and has appeared in almost every game following. In the majority of its appearances, Laser Ball gives the Laser ability when eaten. Keep in mind that Laser Ball is an enemy who can float through walls. Another one of these types of enemies is Cupie.

Laser Ball flies around, trying to stay on the same plane as Kirby. Once Laser Ball has gotten Kirby in his line of fire, he will start to glow and shoot out a laser, or possibly a long stream of them. Soon after it shoots, Laser Ball flies away. If Kirby eats one, he gets the Laser ability.

Laser Ball appears with the same behavior, except he can now bounce his lasers off of nothing. Also, he doesn't give Laser in this game - instead he gives Beam. 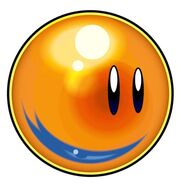 Kirby Super Star Ultra
Add a photo to this gallery
Retrieved from "https://kirby.fandom.com/wiki/Laser_Ball?oldid=76376"
Community content is available under CC-BY-SA unless otherwise noted.