Laser Ball is a common enemy in the Kirby games. It is an orange ball with eyes, which will try to attack Kirby by firing lasers at him. Similar to most other enemies, Laser Ball also sometimes comes in other colors. Its first appearance was in Kirby's Adventure, and has appeared in almost every game following. In the majority of its appearances, Laser Ball normally grants the Laser ability when inhaled, and in Kirby Super Star and its remake, gives Beam. Keep in mind that Laser Ball is an enemy who can float through walls, making it a challenge to defeat in certain situations. Other enemies that can do this are Cupie and Soarar.

Laser Ball appears as an enemy in the downloadable Kirby Fighters Deluxe. It is found in the Butter Building stage. The foe attacks by shooting one to four lasers at the Kirbys. 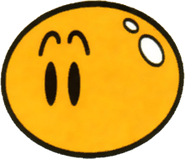 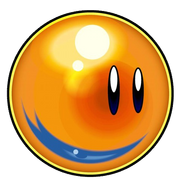