Laser is a Copy Ability in the Kirby series, debuting in Kirby's Adventure.

Laser focuses on firing lasers that ricochet off slopes to deal damage. Laser can light Cannon fuses and can use its ricocheting to hit objects in otherwise more difficult places; certain stages are designed with this aspect of Laser in mind. Laser is obtained from the Laser Ball enemy.

In Kirby & The Amazing Mirror, Laser can also be obtained from the Metal Guardian enemy.

In Kirby's Adventure, Kirby fires lasers from his hand, but starting in Kirby: Nightmare in Dream Land, Kirby gains a high-tech visor.

In addition to lighting Cannon fuses, Laser can now light Candles, vaporize clouds, and melt snow and ice; despite its heating abilities, it cannot incinerate grass or bushes. Upon obtaining the Laser Ability Scroll, located in the first Treasure Chest in Extra Stage of Jam Jungle, Laser can now charge up a bigger, more powerful laser. Laser can be obtained from Laser Ball or Doc's laser cannon. 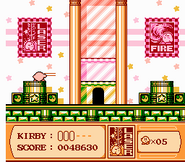