Kirby Wiki
Register
Don't have an account?
Sign In
Advertisement
in: Characters, Articles with non-canonical information, Bosses,
and 21 more
English

Landia, also referred to as the Guardian Angel, is a character in the Kirby series, debuting as the (former) secondary antagonist in Kirby's Return to Dream Land. He is a four-headed dragon that lives in the volcanic domain of the planet Halcandra, where he has protected legendary treasures and relics since the ancient times, most notably, the Master Crown.

Landia is a red-orange dragon that has four heads that is roughly the size of Dyna Blade when compared to Kirby. The position of the heads are that of the four cardinal directions of a compass. The northernmost head wears the Master Crown, which has a blue jewel in its center. Each of the heads have dark green eyes, two red-orange ridges along the sides of their faces, and dark red marks shaped like stars across their faces. Around the necks of Landia's heads is a mane of what appears to be white fur. His wings are like that of a bat, with the webbing colored yellow and a single light red talon atop each wing. Each head has pink and magenta striped horns on it, with the side heads having three horns and the top and bottom heads each having two. Landia has two large orange feet, each foot having three light red claws on them. His underside is a shade of peach and he also has a long red-orange tail that ends in purple arrowhead with small red stripes.

When knocked to half his health, Landia taps into the power of the Master Crown and splits into four smaller dragons after roaring. One of the dragons still retains the Master Crown on his head, which now has a green jewel in it. His eyes turn from green to red and each dragon has two face-ridges instead of three. The smaller Landias each have two striped horns and their own manes of white fur now. Their wings lose the talons they previously had and their feet are much smaller, each only having a single dark orange claw. The ends of their tails also lack the purple arrowhead from before.

In Extra Mode, he looks almost the same, save for a different color scheme: He is purple instead of red-orange. Landia EX also has a light blue underside, black star-shaped facial markings, brown eyes (purple in later "Kirby" games), and yellow fur around his necks. His horns, claws, and arrowhead for his tail are all black, and he has orange webbing for his wings. His eyes still turn red when he splits into four after he loses enough HP. The Master Crown's jewel during this fight is orange and remains the same color even after Landia EX splits.

Kirby, King Dedede, Meta Knight, and Bandana Waddle Dee recover the scattered pieces of the Lor Starcutter, so Magolor repairs it and takes them to his homeworld: Halcandra. Once they arrive there, Landia notices the ship and blasts it out of the sky, causing it to crash once again. Magolor explains that Landia is the ancient guardian of the planet; though he was always asleep, he recently awoke and rampaged. Magolor tasks the group with defeating the dragon.

The four venture through the hostile Halcandran lands and encounter Landia in Dangerous Dinner. They defeat him, and as the four dragons lay unconscious, the Master Crown detaches from one’s head. Magolor slowly descends from the sky, applauding the heroes' victory. He then snatches the Master Crown off the ground, places it onto his head, and uses its power to transform himself into a menacing wizard. He explains that this was his true motivation all along.

Before the game's events, he stole the Lor Starcutter and used it to attack Landia in pursuit of the Master Crown. Magolor lost and the Lor was heavily damaged. The villain had no choice but to retreat, creating and fleeing through a dimensional rift to Planet Popstar. This caused the game's inciting incident. He then reveals that he tricked the heroes into defeating Landia for him so he could acquire the Master Crown. Magolor then sets off through a rift to conquer the universe, starting with Planet Popstar.

The Landia dragons acknowledge the misunderstanding and come to the heroes' aid. Kirby, Dedede, Meta Knight, and Bandana Waddle Dee ride them through Another Dimension to chase Magolor. The wizard summons the Lor Starcutter, and with it under his control, he uses it to battle the heroes. The Lor loses, and Magolor retaliates by firing magic orbs at them. This knocks down each hero and his respective dragon one by one, sending them careening into the center of Another Dimension.

Landia and the Lor see the heroes safely to Dream Land before traveling back through Another Dimension, presumably to Halcandra.

Landia in his first form will use a variety of attacks, such as shooting fireballs at a downward angle, blowing wind with his wings that sends energy blades along the current, and flying down low across the screen. Another attack Landia has is to fly in the center of the screen and have his two side-heads belch out streams of fire at the ground. He will then use his two heads to sweep the flames across the ground, sometimes rising high into the air to cover more ground. Another variation of this attack is for Landia to shoot out the fire-streams underneath himself, then fly to another spot to breathe down fire again. Landia can also hover low to the ground and use his tail like a whip by spinning forward a total of three times. The dragon may sometimes spit out a single fireball in between tail-whips.

After taking out half of his health, Landia will turn into four smaller dragons with one head each. They will start out by flying to the top part of the screen and will spit a fireball downwards. They will repeat this action several times, but quickly fly to random spots and altitudes, making the attack hard to dodge. After shooting about four rounds of fireballs, they will move to new locations and surround themselves in electricity. Each Landia will shoot out an electrical beam to connect to another and move about in random patterns. The beams can be arranged both vertically and horizontally. After enough patterns have been done, the Landias will each gather into groups of two and stare at the middle of the room. Each pair will then take a turn to perform a spinning swoop towards the ground in order to hit Kirby and his friends. Another attack for them is for each dragon to move into a corner of the screen, and one will spit up a fireball. The dragons will then take turns passing it around to each with their wings. After they pass it around for a bit, one will knock the fireball into the background where it will then come crashing back down into the center of the room. It can be noted that during this attack, each Landia will move his tail slightly forward. Should enough time pass by while battling them, the four small Landias will eventually reform into their combined form and can split again into four if enough time passes by.

Landia’s fight is quite different in the Extra Mode, and this is signified with a new intro. Landia flies in from the background in his normal design, but then apparently uses the Master Crown’s power to enhance his own when roaring, turning him into his EX form. The main differences are his new purple and blue color scheme and alterations to its attacks. His heads spit out two fireballs at a time that actually aim for the player characters in rapid succession and when it flaps its wings for the wind, it will fly to the opposite side of the screen and perform the attack a second time. The energy blades that ride along in its wind-currents also home in on the player character faster. When Landia EX touches down for its tail-whip attack, he strikes at a much faster pace with no pauses in between. His fire-stream attack now has it slowly move from left to right as he breathes fire at the ground. Landia EX can also sometimes fly into the background and quickly dive at the characters.

Things become a bit more frantic after Landia EX splits into four. He now uses his lightning attack in a different manner than before. One Landia, each in the corners of the field, will surround themselves with electricity to form vertical beams and move across the field while flickering their power on and off, acting in a similar manner to the Spark Sphere Doomer's lightning attack, only the electricity lasts longer. When the four of them start spitting fireballs at the ground, they may actually begin to follow the player's position as a group and attack several times in a row. Sometimes, three of the Landias will be spitting out fireballs, while the one wearing the Master Crown will attempt to tackle the player from the air. The newest change to the dragons' moveset is after they start passing their large fireball around. The four will start moving closer towards the center of the room as they take turns passing, trying to give the player characters less room to avoid the fireball. After they eventually move back to their corners, they will toss the fireball into the sky like before; only this time, three fireballs will rain down instead of one. Like before, if enough time passes, the four dragons will revert to their four-headed form. Once defeated, Landia’s colors will revert back to normal.

Landia makes a cameo appearance during the game's second boss battle. Paintra draws four images of Landia's smaller dragon form in the background, but one of them is a decoy that immediately falters and falls to the ground. The other three let out a stream of fire that they blast full-force at Kirby. Paintra DX uses the same attack, but with the Landias colored to resemble their EX form.

These aren't the actual four dragons encountered in Kirby's Return to Dream Land, but rather imitations, identical in nature to the creations of Adeleine. Landia's appearance is a direct callback to those fights, which also featured painted versions of bosses from previous games.

Landia appears as the final boss of the Team Kirby Clash sub-game. He retains his attacks from Kirby's Return to Dream Land. Landia EX is fought as a bonus quest.

Landia appears as a boss in Team Kirby Clash Deluxe and Super Kirby Clash. In the games, he serves as the guardian of the Empyrean. In Team Kirby Clash Deluxe, Landia is fought as a Tough category boss in the Empyrean. However, he is later fought as Landia EX, a Tougher category Ordeal boss in the Decisive Battlefield, which is treated as the fake final boss. Landia's counterpart from Another Dimension, Parallel Landia, is also introduced in this game. This game also confirms Landia's gender: male.

Landia appears as a primary, Advanced-class attack spirit in Super Smash Bros. Ultimate. When applied to a fighter, the fighter’s jumps increase. 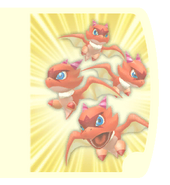 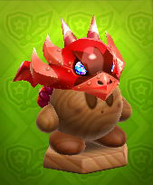 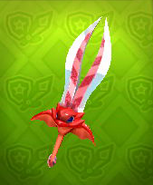