Yūko Mizutani
Lady Like is a character in Kirby: Right Back at Ya!. She is the wife of Cabinet Minister Sir Ebrum and the mother of Tiff and Tuff. She loves her husband and two children and worries about their safety and sometimes gets suspicious of King Dedede's schemes as a result, as many of them involve putting her family in danger. Despite her occasional suspicions, she often gives her family the freedom to do what they want.

Like her husband, Lady Like is a yellow-skinned being with orange eyes, pink eyeshadow and detailed eyeliner. She has curly blond hair with a bang that are the same color as her skin and pink lipstick. She wears a long lavender dress with an orange foulard and emerald earrings. She is often seen carrying a pink folding fan with lime feathers.

As her name suggests, she is a glamorous, lady-like woman with a naive personality. She is courteous and gentle ways and demands that her children do the same. She tends to faint in the face of inhumane behavior or when she is frightened. She tends to care to her skin a lot and she is more protective and anxious towards her children than her husband. 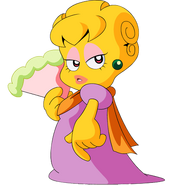 Lady Like and Sir Ebrum when they were younger.
Deutsch Italiano 日本語
Community content is available under CC-BY-SA unless otherwise noted.
Advertisement