Knuckle Joe is an enemy in the Kirby series, debuting in Kirby Super Star. He gives the Fighter ability when inhaled. He is also a recurring and semi-important character in Kirby: Right Back at Ya!.

Knuckle Joe is a small humanoid creature with pointy ears, spiky yellow hair, and eyes similar to those of Kirby. Knuckle Joe wears a blue jumpsuit, white gloves, blue shoes, and a white headband with a red jewel set in it. He is also shown to have two small red shoulder pads, although these are not present in all of Knuckle Joe's appearances.

Knuckle Joe is an uncommon enemy in this game, and he appears as the only regular enemy in the game that gives the Fighter Copy Ability. As an enemy, Knuckle Joe has several attacks. He may unleash a flurry of Vulcan Jabs, charge up and launch a Smash Punch, or dash forward with three swift punches. If Kirby is above Knuckle Joe, the enemy may jump upward with a Rising Break in an attempt to hit Kirby. He is weak to the Blizzard element. As a Helper, Knuckle Joe can use all of the same techniques as Fighter Kirby can, except for Judo Throw. He can also perform Smash Punch underwater, albeit with a much shorter range. A Knuckle Joe with a red outfit appears in Helper to Hero.

Knuckle Joe fights Kirby over a star piece in this game. He first beats up Kirby and his friends before the match begins. After being defeated, Knuckle Joe is carted off in bandages by Waddle Dee.

In these games, Knuckle Joe behaves like he does in Kirby Super Star, and is a very uncommon enemy, only appearing in a few stages. Knuckle Joe appears in the Fighter Combat Chamber in Kirby's Dream Collection Special Edition.

Knuckle Joe appears in these games, sporting all the attacks he had in Kirby's Return to Dream Land. Knuckle Joe can leap from the background to the foreground (or vice-versa) in Kirby: Triple Deluxe, though he cannot in Kirby: Planet Robobot.

A Knuckle Joe appears as an NPC to talk to in The Cake Royale. He mostly says things relating to the current Copy Ability Kirby has equipped. For some Abilities, he gives minor tips on using them to defeat foes.

Knuckle Joe returns in Kirby Star Allies as an enemy and a friend for the Fighter ability.

Unknown, but same as his father

Knuckle Joe makes an appearance in the Kirby: Right Back at Ya! anime as formally one of Nightmare Enterprises monsters, later turning into an ally of Kirby. Knuckle Joe is often the source for obtaining Fighter in the anime, as most of Fighter Kirby's appearances are in episodes featuring him.

Joe's first appearance was in the episode Here Comes the Son, where he was looking for the Star Warrior in Dream Land. Emerging from the monster delivery system, he had a ghost-like form, but turned into his true form with a purple color, somewhat resembling his enemy coloration. He goes on a rampage in Castle Dedede, clobbering the Waddle Dees. For an unknown reason, he goes for Tiff and Tuff before going to a standoff with Meta Knight, which is interrupted by King Dedede and Escargoon arriving with a tanker. Joe effortlessly tosses the vehicle out of a hole in the wall and the duo crash a few stories into the ground. Introducing himself, Knuckle Joe is told of a Star Warrior named Kirby by King Dedede. He searched Cappy Town and interrogated the populace for Kirby's whereabouts, but they feigned ignorance. In an interrogation with Chief Bookem, Knuckle Joe revealed he was after Kirby because he believed he was the Star Warrior who killed his father. Late in the night, he found Kirby hidden in a cave by Tiff, Tuff, and Chef Kawasaki. While mortified of Kirby's physical appearance and childish demeanor, Joe still challenged the young warrior to a duel. Kirby didn't fight and was promptly turned into a punching bag. Just as Knuckle Joe (puzzled by Kirby's refusal to fight back) was about to deal the finishing blow, Meta Knight appeared again to intervene and revealed he was the one Joe was looking for, and explained the circumstances to him: Joe's father was a powerful and admired Star Warrior and best friends with Meta Knight. Monsters ambushed them one night and Joe's father was abducted. When he returned, his comrades were jubilant until they realized to their horror that Nightmare had turned him into a monster and a devastated Meta Knight had no choice but to slay his dear friend for the greater good. But he wasn't completely evil though; the love of his son, Joe himself, stopped him from being completely taken over by eNeMeE's influence and entrusted Meta Knight with his prized medallion of his infant son before passing away. Joe isn't satisfied, throwing the medallion to the ground and denouncing his father as a weakling. With this, Meta Knight states his relief Knuckle Joe's father isn't alive to see the vengeful monster his son's become, which Joe denies. Meta Knight then tests Joe's claim by having him fight Kirby again, for the latter had the ability to battle all forms of monsters. Kirby inhaled his attack and turned into Fighter Kirby. Fighter Kirby used the same attacks he did, making it an evenly matched duel. Eventually, Joe got bent on finishing Kirby ("I don't care what happens, I just wanna destroy Kirby!" in his thoughts) and he turned into a monster—a spiked ball with arms similar to Togeira. Kirby changed into Needle Kirby after he swallowed another one of Joe's attacks and started to overwhelm him. Meta Knight pleaded with Joe to abandon his anger before it could lead to his own undoing and with a change of heart, Joe was defeated and turned to normal. Now pleased to know the truth of his father, he left Dream Land and hoped to one day fight on the same side with Kirby and Meta Knight,

In his second appearance was in the episode, Monster Management, he looks like the Kirby Super Star Helper. Here he is a Monster Manager for Nightmare Enterprises, much to the shock of Kirby, Meta Knight, Tiff, and Tuff. He sent out an innumerable amount of small monsters to Dream Land. Kirby inhaled them all, which tired him out. Joe then released Masher, claimed as the strongest monster, to deliver the final blow to an already exhausted Kirby. Eventually, Joe gave Kirby the Fighter Ability to give a fair fight before turning on Masher. He reveals he's now a Monster Hunter, and that he was after the toughest monsters, thus he went after Masher. He and Kirby teamed up on Masher and defeated him. With that, Joe departed on good terms with Kirby once again.

In Joe's third appearance was in the episode Masher 2.0. He is fighting a group of monsters led by a powered-up version of Masher, Masher 2.0. Battered and weak, he finds a Monster Transmitter and manages to escape from Masher 2.0 to Dream Land, where he's found unconscious by Sword Knight and Blade Knight. Joe has a vision where his father is trying to show him something before waking up bedridden. With Fighter Kirby's help and a secret memory chip in his father's medallion, he's able to destroy Masher 2.0.

In his fourth and final appearance in the anime, Joe aids Kirby with his attack against eNeMeE in the 99th and penultimate episode of the anime, Combat Kirby.

In the anime, Joe has a tendency to wipe his "nose." Kirby often mimics this, both normally and in Fighter form, despite the fact that neither Kirby nor Knuckle Joe actually has a nose.

In his holograph form, Knuckle Joe looks similar to his in-game counter-part, he is a small humanoid creature with pointy ears, spiky hair, and large eyes with eye lids, Knuckle Joe wears a jumpsuit, gloves, shoes, and a headband with a jewel set in it.

In more original form, Knuckle Joe looks similar to his in-game counter-part, but with a few differentiates, he has spiky white hair, and white eyes with dark purple eye lids. Knuckle Joe wears a red jumpsuit, light green gloves, red shoes, and a green headband with a yellow jewel set in it, he also has purple skin.

In monster form, Knuckle Joe now has a rounded body with no legs, and small arms with large boxing gloves with spikes on top of the fists, he also has no mouth, but the top part looks similar to his original form.

In his normal form, Knuckle Joe looks much more like his Helper counter-part, Knuckle Joe is a small humanoid creature with pointy ears, spiky yellow hair, and eyes similar to those of Kirby. Knuckle Joe wears a blue jumpsuit, white gloves, blue shoes, and a white headband with a red jewel set in it and tan skin.

Knuckle Joe is head strong and brutal. He always likes to battle and will stop at nothing when battling. He is also vengeful, wanting to destroy Kirby thinking that he was the one who destroyed his father. Despite this, he is really good hearted and will do anything in his power to stop eNeMeE and save the world.

Both Holographic and Original Form

Knuckle Joe is one of Kirby's most powerful allies in the anime, in his holographic form only he is able to fly effortlessly despite the lack of wings, he displays incredible strength, being able to lift up Dedede's car with both King Dedede and Escargoon on it, Knuckle Joe also posses his fighter abilities, he can fire energy balls from his fist (which he says: Vulcan Jab!), can fire a large energy ball with the same fists (which he says: Smash Punch!), can unleash an energy wave with his foot when kicked in the air (which he says: Spin Kick!) and his strongest attack, being an energy upper cut (which he says (Rising Break!), also by unknown means only when in his monster form he is able to conker small lighting bolts.

In his monster form, Knuckle Joe only displays one ability, being able to fire a barrage of spikes from his head.

Knuckle Joe appears in Super Smash Bros. Brawl as both an Assist Trophy and a regular collectible trophy. In this role he attacks opponents by using Vulcan Jab, followed by either a Smash Punch or a Rising Break after being summoned—with both attacks being noted by him shouting their names upon using them. The last two attacks mentioned are basically to instantly KO enemies who happen to be in his way, which more than likely will connect as his fast-paced Vulcan Jab allows little to no time to escape. Knuckle Joe may occasionally fall off the stage and self-destruct without managing to do any damage at all if there are no enemies in close-enough vicinity.

Appearance-wise, this Knuckle Joe wears a blue jumpsuit, which is identical to Kirby Super Star’s Helper version. He also has a very high-pitched voice.

In Super Smash Bros. Ultimate, Knuckle Joe appears as a primary, Ace-class attack spirit as well. When applied to a fighter, the fighter’s fist attacks increase. 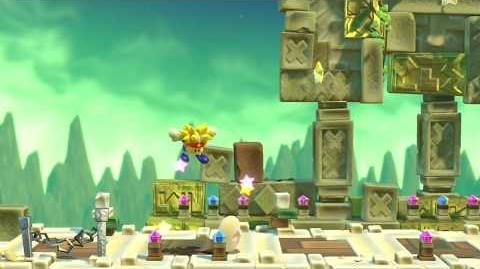 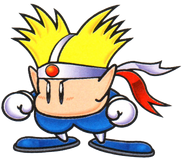 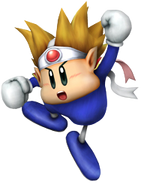 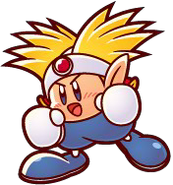 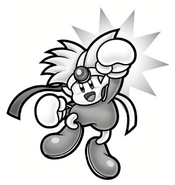 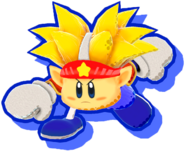 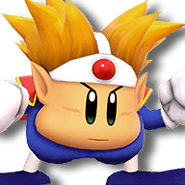 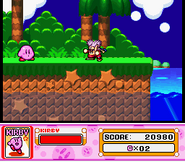 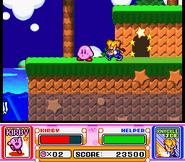 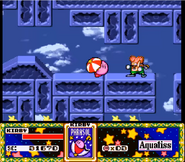 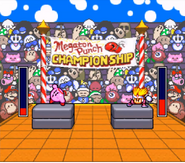 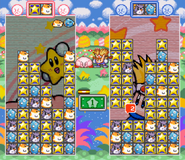 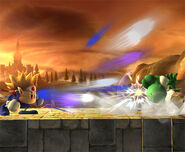 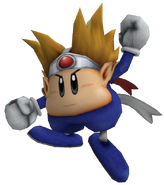