Island of the Lost Warrior

Kit Cosmos is a character in Kirby: Right Back at Ya!. He is a Star Warrior who lived on a solitary island that, for some unknown reason, he was stranded on for a long time. He had been stuck there for so many years that he thought the Star Warriors still had an army. Kirby, Tiff, Tuff, Fololo & Falala found him on that island and Kit Cosmos mistook them for monsters at first, but he eventually realized otherwise so he started training them and teaching them how to battle monsters. Eventually, however, the kids were able to convince him that the war between the Star Warriors and Nightmare Enterprises had ended in favor of N.M.E. when they saw that Kit Cosmos had a connection to Meta Knight, and they even asked him if he wanted to come with them so he could see Meta Knight again after all those years of a life of solitude on his island. Just then, King Dedede and Escargoon arrived with their monster, Tornadon, who was responsible for the tornado that stranded the kids on Kit Cosmos' island. Kit Cosmos challenged Tornadon but was quickly bested by him, after which Tuff took over only to also get bested. Luckily, Kirby took over and destroyed Tornadon with his Tornado ability. Kit Cosmos then chose to stay on his island as his friends used Dedede's motorboat to go back home, after which he saluted them as they proceeded to do so.

Kit Cosmos appeared as one of the chococapsule minifigures in Snack Attack - Part I (which Tuff got an uncountable amount of) and still later returned to help Kirby and the Cappies take on eNeMeE from within Meta Knight's ship, the Halberd.

Kit Cosmos is a dark brown ball of fur with round eyes and a mouth, and has a light gray moustache and eyebrows - Tuff refers to him as a hairy meatball. He has bare arms and legs with bare hands and feet, and wears a green cap on his head with a yellowish-gray stripe and a gray circle on its front, and on that gray circle is a star, signifying that he is a Star Warrior. He is shown to carry a bow and arrow, a bokken to train people with, and a saber.

Kit Cosmos is a soldier through and through. Being an old geezer, he likes to talk about the good old days, and is proud to serve with anyone related to the Star Warriors and anyone who is friends with that someone. Kit Cosmos is a tough old man, and has a positive additude, and is always ready to take on any challenge and go with anyone who volunteers to carry out a mission. Despite his old age, Kit Cosmos even still devotes his life to protecting others.

When he was still believing that the war against Nightmare Enterprises was still going on, Kit Cosmos used to distrust outsiders out of paranoia and would mistake them for monsters until he got to know them better. Luckily for him, Kirby and friends managed to change his outlook for the better once Tuff's pocket knife with the image of Meta Knight's mask drawn on it revealed that he had a connection to him, as well as when Kirby bravely defeated Tornadon to save their lives. 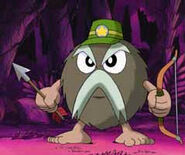 Kirby: Right Back at Ya!
Deutsch Italiano 日本語
Community content is available under CC-BY-SA unless otherwise noted.