Nintendo's Kirby series first began in 1992 with the release of Kirby's Dream Land. The franchise has existed for nearly 3 decades, and in that time, HAL Laboratory has celebrated some of its most notable milestone years. This is a list of Kirby series anniversaries, describing when and how each was celebrated.

For reference, Kirby's Dream Land debuted in Japan on April 27 and North America on August 1; thus, both of those dates are considered Kirby's official birthday. These dates are bold when mentioned below.

The year 2002 marked the series' 10th anniversary. Though Nintendo did not bring attention to this, the company did celebrate the occasion by releasing Kirby: Nightmare in Dream Land for the Game Boy Advance.[1] This is a remake of Kirby's second game, Kirby's Adventure, which launched on the Famicom and Nintendo Entertainment System in 1993, and was notable for introducing Kirby's Copy Ability.

The year 2007 marked the series' 15th anniversary. Like the 10th anniversary, Nintendo did not bring attention to this. However, the company did begin developing Kirby Super Star Ultra to celebrate the occasion, then released it for the Nintendo DS in 2008.[2] This is a remake of Kirby's ninth game, Kirby Super Star, which launched on the Super Famicom and Super Nintendo Entertainment System in 1996.

The year 2012 marked the series' 20th anniversary. Unlike the previous anniversaries, Nintendo made an effort to capitalize on it.

Nintendo released an original game, Kirby's Dream Collection Special Edition, for the Wii. As its name implies, it is a collection of six classic Kirby games: Kirby's Dream Land, Kirby's Adventure, Kirby's Dream Land 2, Kirby Super Star, Kirby's Dream Land 3, and Kirby 64: The Crystal Shards. It features two other game modes: The first of these is New Challenge Stages, which has Kirby play through challenge stages based on those in Kirby's Return to Dream Land; this mode serves as an epilogue to that game. The last mode is Kirby's History, which has Kirby travel down a hall filled with past games. The player can read about them, watch clips from them, view each box, watch three episodes of Kirby: Right Back at Ya!, read manga volumes (only in the Japanese version), and watch a symphony play a medley of Kirby music.

Packaged with the game are a Compilation Soundtrack CD and a copy of Kirby's 20th Anniversary Celebration Book. Whether the player is reading about them or listening to music from them, both cover almost every game in the series. The book is slightly different in each region it was released in, as certain games were or were not released in those regions (for example, the Western version replaces any mention of Kirby's Super Star Stacker with Kirby's Avalanche, as the former game was not localized outside of Japan).

On September 1st, Nintendo hosted an event at PAX Prime in Seattle, Washington. To celebrate the anniversary, the company wanted to break the Guinness World Record for the most people in a room blowing a chewing gum bubble simultaneously. Altogether, 536 fans showed up to participate, setting the new record.[3]

The year 2017 marked the series' 25th anniversary. Nintendo brought attention to this anniversary, especially in Japan.

During a Nintendo Direct presentation on April 12, 2017, Nintendo revealed its plans to celebrate the 25th anniversary of Kirby through a series of three game releases during the year. This included unveiling and releasing Team Kirby Clash Deluxe, as well as announcing Kirby's Blowout Blast for a Summer release. A third game was teased for a Winter release, though no details were announced then.

Kirby's Blowout Blast, an expansion of the Kirby 3D Rumble sub-game from Kirby: Planet Robobot, is a simplistic game that hearkens back to Kirby's Dream Land, and it is the first completely 3D game to use traditional gameplay in the series. Team Kirby Clash Deluxe, an expansion of the Team Kirby Clash sub-game from Kirby: Planet Robobot, is more complex, introducing certain RPG elements and in-game purchases. It contains appearances from and references to characters from throughout the series.

During a Nintendo Direct presentation on September 13, 2017, Nintendo announced the third game: Kirby Battle Royale is a somewhat complex game that plays like a combination of Kirby's Blowout Blast and Kirby Fighters Deluxe. It features 10 game modes, some two-dimensional and some three-dimensional, and brings Copy Abilities into a 3D space for the first time. The game also features some references to past games. It was released in November 2017 in Japan and Europe, and January 2018 in North America. 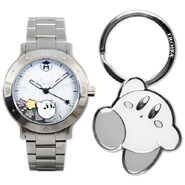 Designs for a Kirby Pupupu Train plush cube, with Kirby series characters demonstrating how not to behave while riding a train.

The year 2019 marked the series' 27th anniversary. Nintendo brought little attention to this anniversary, with only one event to celebrate in Japan and a few mentions on social media.

On April 26, the Kirby of the Stars Photo Frame webgame was updated to add three more usable frames. One of the frames celebrated the anniversary using a collection of Kirby's Copy Ability artworks borrowed from the Kirby 25th Anniversary Polls.

On April 26, the Kirby of the Stars Photo Frame webgame was updated to add three more usable frames.

Kirby and the Forgotten Land was formally revealed during the September 23rd Nintendo Direct and it was released on March 25th, 2022.