Kirby and the Forgotten Land is an upcoming 3D platformer Kirby game developed by HAL Laboratory and published by Nintendo for the Nintendo Switch. The game was announced in a Nintendo Direct on September 23, 2021 and is planned to release worldwide in March 25, 2022.[1] It became available for preorder on Nintendo eShop on January 12, 2022.

Kirby awakens on a beach of an unknown "new world"[2] to find himself in a strange and mysterious land of the past, where civilization and nature have become one. The land is inhabited by the Beast Pack,[3] a group of beast-like foes who are imprisoning numerous Waddle Dees, leaving it up to Kirby to save them. At some point, Kirby allies himself with a flying, cyan, rodent-like creature named Elfilin, before they are attacked by Gorimondo, one of the higher-ups of the Beast Pack, leading to Kirby doing battle in order to rescue the Waddle Dees.

Kirby and the Forgotten Land is the first 3D action platformer in the main series; it appears to control similarly to Kirby's other 3D entries, such as Kirby Air Ride and other games following the sub-game Kirby 3D Rumble. Unlike most previous forays into 3D, however, this game features fully functional Copy Abilities. The game still follows the formula of reaching the goal location to free a Waddle Dee, instead of being an open world entry. The game's environmental design appears to take cues from Kirby GCN and Kirby: Planet Robobot.

Waddle Dee Town functions as the main hub world for Kirby and his allies to rest at. Here, Kirby can unlock various structures as he frees more Waddle Dees, which can unlock minigames and submodes. Additionally, Kirby can spend currency for collectable capsules (much like keychains, figurines, and stickers) or talk to the Wise Waddle Dee for online records.

The game is set to include weapons that allow for ranged firing using a "targeting/crosshairs" system.[4] 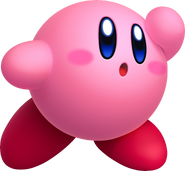 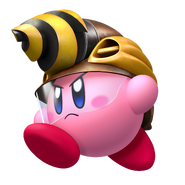 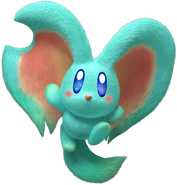 Kirby encounters a group of Garlfis in a dilapidated shopping mall.

Kirby approaches an outdoor stairway with a Kabu.

Kirby wanders outside an amusement park with some chicks following him.

Kirby inhales a Garlfi. Sir Kibble can be seen in the distance.

Needle Kirby rolls along the ground.

Kirby floats to an island guarded by a gator-like enemy.

Kirby washes up in a mysterious location.

Kirby runs up the escalators.

Kirby wanders outside and finds a Cappy and Hot Head.

Kirby stumbles upon a scare in a creepy corridor.

A trio of Waddle Dees are freed from a cage.

Kirby riding the Warp Star through the street.

Kirby spits out a Buffalhorn.

Kirby climbs a ladder while being attacked by Shotzos. A Gabon is perched to the side.

Kirby and Elfilin purchases a capsule at the capsule machine