Kirby Tilt 'n' Tumble is an action puzzle Kirby game developed by Nintendo R&D2 and HAL Laboratory for the Game Boy Color. It was released in Japan on August 26, 2000 and in North America on April 9, 2001. It was never released in PAL regions, possibly due to the impending release of the Game Boy Advance.

The game starts with Kirby napping on a cloud. He awakens as Waddle Dee is walking with a bumper. He then notices King Dedede walking by with a larger bumper. To find out what they are up to, Kirby jumps on the Warp Star only to find, once again, "A Dream Land without its stars." It is up to Kirby to get them back.

The game uses a four-way tilt sensor allowing the user to "roll" Kirby by tilting the Game Boy Color. The goal is to guide Kirby to the finish by tilting the Game Boy in the direction where the player desires to move him. The game uses a "pop" action, when the player jerks the Game Boy vertically. This makes Kirby jump up into the air, which transforms all on-screen enemies into stars. Popping a second time will turn the stars into clocks, and popping a third time will turn the clocks into Power Drinks.

The stages in Kirby Tilt 'n' Tumble are littered with bumpers, pits, hills, and other hazards. As such, the player will often need to use careful movement and timing to succeed.

There are also numerous stars in each of the levels. To play a sub-game (chosen by the player from a menu), Kirby must find a Blue Star and clear the stage. To complete the game 100%, the player must collect the Red Star in each stage. Clearing sub-games grants extra lives, which are saved to the game file unlike in most Kirby games.

This game features a time limit for each stage. Players can extend the time by collecting clocks on the stage or by passing checkpoints. If the timer reaches zero, Kirby loses a life. When there are less than 50 seconds in the timer, an alarm sounds and the music begins playing at a faster speed.

The tilt sensor of the cartridge can only register a simple binary input in one of four directions at a time. It is not as sensitive or advanced as the accelerometers used in later Game Boy Advance games with tilt-sensing cartridges, such as WarioWare: Twisted!. Thus, the degree that the system is tilted does not affect the speed at which Kirby rolls. However, the in-game physics of Kirby's movement are detailed and sensitive enough to compensate for this and give the illusion of greater responsiveness from the tilt sensor.

Nintendo originally had plans to release a sequel to Kirby Tilt 'n' Tumble for the Nintendo GameCube, but it ended up being quietly cancelled.

Promotional artwork
Add a photo to this gallery 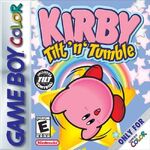 Cartridge
Add a photo to this gallery

advertisement
Add a photo to this gallery

Kirby on Level 2-2
Add a photo to this gallery

Retrieved from "https://kirby.fandom.com/wiki/Kirby_Tilt_%27n%27_Tumble?oldid=341868"
Community content is available under CC-BY-SA unless otherwise noted.