Kirby Super Star Ultra is a platformer Kirby game developed by HAL Laboratory and published by Nintendo for the Nintendo DS. It was released in North America on September 22, 2008, in Japan on November 6, 2008, in South Korea on November 13, 2008, in Australia on November 27, 2008 and in Europe on September 18, 2009. A remake of the 1996 Super Nintendo Entertainment System (SNES) platform game Kirby Super Star, it includes all sub-games found in the original and adds several new ones.

Kirby Super Star Ultra is an enhanced remake of Kirby Super Star, and features revamped content from the original game. 3D FMV cutscenes appear in all sub-games, visuals from Kirby Super Star are improved, more bosses are added, and the gameplay is added to or modified in some ways.

All of the main games from Kirby Super Star (Spring Breeze, Dyna Blade, Gourmet Race, The Great Cave Offensive, Revenge of Meta Knight, Milky Way Wishes, and The Arena) have returned (although the player is initially restricted to playing Spring Breeze in order to unlock the next three games). Gourmet Race can now be played with two players (the second player is Yellow Kirby). Conversely, Megaton Punch can no longer be played in 2P mode.

In most cases, two copies of the game are required for two systems to be able to play together, making this version less convenient for multiplayer than the SNES original. While Kirby Super Star Ultra does offer single-card Download Play support, it is restricted to Spring Breeze. Furthermore, the player who does not have a copy of the game will only receive an application that allows their Nintendo DS to be used as a second controller on the other player's system; it will not display the game screen. Thus, in this arrangement, the second player is required to look over the shoulder of the first player at their own Nintendo DS screen.

King Dedede wants revenge on Kirby for beating him back in Spring Breeze. The game is a recreation of the Extra Mode in the original Kirby's Dream Land, although abbreviated (similar to the Spring Breeze sub-game), a new stage (Mt. Dedede Sky), with a different final stage (ending with a fight against King Dedede with a mask and a metal hammer).

Play all of the Main Games in Kirby Super Star as Meta Knight (excluding Gourmet Race and The Arena). Meta Knight behaves as a modified version of the Sword ability, with notable differences being his Down Thrust making him fall straight down at increased speed and not rebounding, having an Up Trust, having wings that behave like Hover Flap, and having minor changes that allow him to solve all of the game's puzzles; he also possesses special moves that the player can use by tapping them on the touch screen. The game records the player's best time for the run of each game in Meta Knightmare Ultra. The game has various changes to some modes, such as blocking access to some rooms, collectibles being replaced with food, and a different plot. At the end, Meta Knight wishes to Nova to fight the greatest warrior in the galaxy.

An endurance challenge where the player can play as any and every helper, and the final boss is a pair of Wham Bam Rock, and the Wham Bam King, Wham Bam Jewel. Beating it with all helpers will unlock a cutscene showing the original cutscenes from Kirby Super Star.

A harder endurance challenge that has all the bosses from Revenge of the King (except Bandana Waddle Dee, who was fought in The Arena), and the four new bosses as the Final Four, Masked Dedede, Wham Bam Jewel, Galacta Knight, and the revenge of Marx—as the dreadful, evil, and incredibly deadly Marx Soul. Beating The True Arena unlocks the Movie #34: Special Edition Blooper Reel in the theater, which twists and makes fun of previously-seen cutscenes before The True Arena is unlocked.

Based on games played with Japanese playing cards, this reaction-testing sub-game resembles a more complex four-player version of Samurai Kirby. On the touch screen, several cards will be revealed to the player and the goal is to be the first one to tap the matching card that shows up on the top screen. A player will get disqualified if they tap before the card is shown.

A cowboy-themed, fast-paced shooter sub-game where Kirbys need to take out as many targets as they can for points. Each player has eight rounds of ammo before running out, but the players can reload by tapping the bottom of the screen. Bombers will appear, which players need to avoid because they give negative points when shot.

A frantic sub-game where Kirbys sit at the bottom of a conveyor belt and try to eat as many food items as they can. The items will start moving down from the top screen, so players can look ahead to see what's coming next. Bombs can be tossed around, as tapping them will knock them into another Kirby's lane. Bugs and rocks will also come up, but because Kirby doesn't seem to digest those very well, the players need to quickly tap them to get them out of the way before they reach Kirby's mouth. Halfway through the game, the lanes will also change to keep Kirbys on their toes. 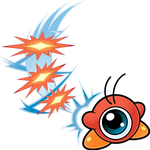 Bugzzy
Add a photo to this gallery

Korean Logo (in-game)
Add a photo to this gallery

KOR Box Art
Add a photo to this gallery

Menu icon
Add a photo to this gallery

Retrieved from "https://kirby.fandom.com/wiki/Kirby_Super_Star_Ultra?oldid=336205"
Community content is available under CC-BY-SA unless otherwise noted.