Start a Wiki
watch 02:00
Nintendo DS - 'Kirby Mass Attack' E3 Trailer
Do you like this video?

Kirby Mass Attack, known in Japan as あつめて!カービィ (Atsumete! Kābī, meaning Gather! Kirby), is an upcoming Kirby game for the Nintendo DS, slated for American release on September 19, 2011. Released in the system's waning years, it was not a high profile title at E3 2011 although its US title was announced then, in the form of a logo pop up at the end of the Nintendo press conference mainly highlighting the Wii U and the 25th anniversary for the Zelda franchise. Nintendo did not have an area for the Nintendo DS, so the game's playable representative at the convention was a Japanese demo of the game presented by roaming attendants in the Wii U area.

Kirby is taking a nap on the grass in the day when Necrodius (ネクロディアス, read Nekurodiasu) comes out of nowhere and zaps him with a bolt of lightning, splitting Kirby into 10 individuals. The Kirbies fight against Necrodius, but they are smaller and much weaker than Kirby as one individual, and Necrodius soundly defeats all but one. The lone Kirby escapes and finds the Heart of Courage (translated name), which also popped out of Kirby when he was split into ten, and follows it on a journey to put himself back together.

Necrodius' motivations are not known at this point. He resembles Nightmare to some degree, but wields a wand and has less patterns on his garment. 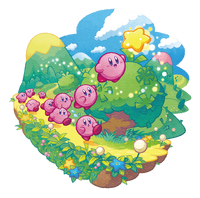 While Kirby Mass Attack is a Kirby platformer, there are a few fundamental differences that makes it completely different from all the other titles. This is the first time where the player can control up to ten individual Kirbies instead of just one, although each has much more limited capabilities than the single Kirby due to Necrodius' spell.

The health mechanic for the game does not follow the tradition where Kirby gobbles up Food to replenish lost health. Food no longer heals Kirby, but instead fills a meter which drops another Kirby down from the sky to join the existing group when completely filled. It takes 100 points to fill up the meter.

The only food available in the parts of Dream Land featured in the game is fruit. There are several different kinds of fruit, and different fruit give different values towards the meter; Maxim Tomatoes are still the best one around, giving 100 points by itself. There are several ways to obtain fruit: defeating enemies, bumping Kirbies into fruit trees and into certain floating crates will cause fruit to be dropped onto the ground, which the Kirbies can pick up.

Each Kirby essentially only has one point of health, and they turn blue when hit. If the blue ones are hit again, they turn into gray angels and slowly float into the sky, but they can be tapped on to coax the other remaining Kirbies to bring them back onto the ground and return them to their blue, hurt state. There are restoration areas similar in function to the ones in Kirby Air Ride which return hurt Kirbies back to pink. These are pink, floating rings in the sky. Kirbies are healed if they are sent flying through one of them.

Collecting any item gives points towards a high score (top-right on the top screen). If the player is already at the maximum number of Kirbies, filling up the Kirby meter gives a 10,000 point bonus towards the high score instead.

The main goal in the game is to gather a large number of Kirbies in a level by collecting fruit, and successfully bringing enough of them to the end of the level and back to the overworld map. In a level, certain obstacles can only be removed when there are enough Kirbies pulling or pushing on it, and individual levels can only be entered from the overworld map only if the number of Kirbies matches or exceeds the number on the level. Every main level hub has its levels represented in concentric circles, with links in between, and the boss right in the middle. Levels leading to the boss fight have increasingly-larger numbers of Kirbies needed. There is no specific order by which the levels need to be cleared. Should the player have sufficient Kirbies, he/she can go straight to the boss.

Collectibles that resemble medals are hidden behind the obstacles throughout the game. There are between one to five in each level, and there are several types, including gold and rainbow-colored variants. The differences between the types are not clear at this point, but it is likely, given the role of treasures in previous titles, that one of them is optional and one of them is key to completing the game. At least one of them serves to unlock minigames, similar to Canvas Curse's Medal Swap system. 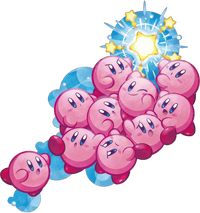 Kirby Mass Attack is played exclusively with the stylus on the DS's touchscreen, like Kirby: Canvas Curse. The player's stylus moves Kirby's Heart of Courage, which the Kirbies faithfully follow around. Tapping on any location and the Kirbies will try to move there. Double-tapping makes them dash over instead of walk.

Tapping on an enemy or object sends all the Kirbies on it. They will gang up on enemies and attempt to pull down whichever obstacle is in their way, as long as there are enough Kirbies to perform the action. Flicking the stylus while on a cluster of Kirbies will send them in the direction of the movement one by one. Sending them bouncing off certain trees will dislodge fruits. Holding the stylus in place for a while makes all the Kirbies cluster around the Heart of Courage, which starts glowing. Dragging the stylus on the screen at this point will draw a line similar to drawing Rainbow Lines in Canvas Curse, and the player has limited ink as well, but the Kirbies follow the Heart closely instead of following any drawn line. Some occasions calls for tapping a button that pops up to help the Kirbies to pull or push an object or enemy.

Whispy Woods
Add a photo to this gallery

Final Japanese Logo
Add a photo to this gallery

Pre-release fact sheet
Add a photo to this gallery

Retrieved from "https://kirby.fandom.com/wiki/Kirby_Mass_Attack?oldid=107075"
Community content is available under CC-BY-SA unless otherwise noted.