Kirby Fighters Deluxe is a battle-action Kirby game developed by HAL Laboratory and published by Nintendo as a Nintendo eShop exclusive for the Nintendo 3DS family of systems. It was released in Japan on July 23, 2014, in North America on August 29, 2014, in South Korea on September 24, 2014 and in Europe and Australia on February 13, 2015. An upgraded, stand-alone version of the Kirby: Triple Deluxe sub-game Kirby Fighters, it has improved single- and multi-player modes, as well as new items and stages. A sequel to the game, Kirby Fighters 2, was released on the Nintendo Switch in 2020.

Kirby Fighters Deluxe is a fighting game in which Kirbys each use a chosen Copy Ability for a battle. The game contains a multitude of items, along with on-stage hazards and bosses in some stages.

The player can choose from ten different Copy Abilities in this game; these are the same ten that were featured in the original sub-game. If the player has StreetPass data from Kirby: Triple Deluxe on the system, two extra abilities are available, meaning a complete total of 12.

Kirby Fighters Deluxe contains a single-player mode comprising of a boss rush. After choosing a Copy Ability, the player sets the difficulty: Easy, Normal, Hard, or Very Hard. Pressing start allows the first round of nine to begin. The player will still fight Beetle and Bell, even if the player hasn't unlocked them. The first, fifth and last stages of this mode will always be the same; all other stages will be random to some extent.

Round 1 is a simple 1 vs 1 in Flower Land. The following stages will not be in a set order, however. The next three stages are randomly chosen from Castle Lololo, Coo's Forest, Butter Building, Springy Hand Land, and Waddle Dee Train Tracks. Like the game it is based on, stages cannot repeat. Round 2 consists of a 2 vs 1 battle on one of the mentioned stages. The player is teamed up with a Buddy with a different ability to fight another Kirby. Round 3 has the player against two Kirbys with the same Copy Ability on another stage. Round 4 is another team battle, this time 2 vs 2 on another different stage. The opponents will share a Copy Ability. This is the only round in which the Bubbly Clouds stage can be played; Bubbly Clouds is also noticeably more common for this round than other stages.

The next three stages will be randomly chosen from Factory Tour, Dyna Blade's Nest, Haldera Volcano, as well as the aforementioned new stages had they not been used yet. Round 6 follows the set-up of the third round. Round 7 is like the fourth round, but the opposing Kirbys will have different abilities. Round 8 is a battle against three Kirbys with the same Copy Ability. This is the only round in which the Dedede Arena stage can be played, and is the most common for this round.

Aside from powering up his normal moves, he can also perform the hammer spin in which he can hover in the air, and block out the screen with four Dedede keychains. He can also perform the various moves he used as a boss in Kirby: Triple Deluxe, as well as some of Shadow Dedede's attacks. He can inhale and spit Kirby at the screen. He can slice with his hammer in similar ways as he used the axe in Kirby: Triple Deluxe. He can jump into the air and smash his hammer into the ground, creating an explosion. He can float in the air and shoot orange beams at Kirby like Shadow Dedede. Once defeated, King Dedede will be sent flying high into the sky.

In Very Hard mode, King Dedede looks out into the Dream Spring, which now takes on its Kirby: Nightmare in Dream Land design. Kirby rushes in and almost runs into Dedede. Dedede roars, and allows his miniatures to take action. The Fountain of Dreams music plays as Kirby knocks out most of the miniatures. When the last three appear, a remixed medley of King Dedede's themes from Kirby's Dream Land, Kirby's Adventure, Robo Dedede's theme from Kirby's Dream Course, and the Masked Dedede theme from Kirby Super Star Ultra plays. Now he will hammer twice instead of once, a midair slam will create a shockwave, and the Super Dedede Jump will also produce shockwaves. When the fakes are taken out, Dedede once again gets enraged. He can hammer rapidly from side to side and back, as well as rapidly use his Super Dedede Jump in a similar manner. His spin is more vicious, blocking the player's view with keychains which cannot be obtained in Kirby: Triple Deluxe. He can slide on the ground to a corner but then turn around. His demise remains the same.

Multiplayer allows one to play with up to three friends. Other spots will be occupied by CPUs by default, however these can be deleted. Players with the game get to choose one of ten (twelve if the player has a copy of Kirby: Triple Deluxe) Copy Abilities, as well as the new "Random" option. Players without the game are limited to Sword, Cutter, and Beam. However, if a player using Download play has Streetpass data for Kirby: Triple Deluxe, that player can (presumably) also use Beetle and Bell, as well as play on Waddle Dee Train Tracks.

If Ghost in enabled and a player or CPU is defeated, the Kirby can return as a ghost. Ghosts can attempt to attack other players to get back into the game and recover a little bit of health. However, ghosts cannot harm nor KO a Kirby. A similar mode, Training, can be played instead if one doesn't have any friends to play with at the time. 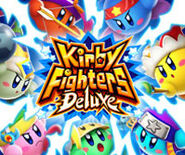 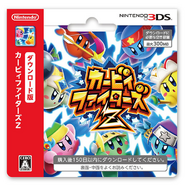 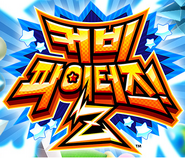