Kirby Fighters 2 Memory Match-Up is a web game in the Kirby series. It was developed and published by Nintendo in 2020 as a promotion for Kirby Fighters 2. The game currently remains on Nintendo of America's Play Nintendo microsite.[1]

This game is a basic memory game. After choosing a difficulty setting, the player is given the cards—eight pieces for Easy, 12 for Medium, and 24 for Hard. Each card sports an image of a Copy Ability or character in Kirby Fighters 2. Every pair of cards the player clicks adds one move to the move counter at the bottom of the screen. The objective is to match all cards in as few moves as possible.

At the end, the player is told how many pairs he/she matched, accompanied by confetti. An image of Kirby Fighters 2’s title screen is shown as well. The player's high score is recorded at the bottom of each difficulty option should he/she replay the game.

The possible card images include: 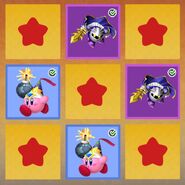 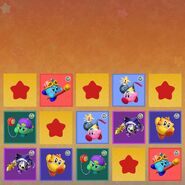