The Kirby Dance is a term used to describe the short dance Kirby does in most of his games usually after accomplishing a certain action (which is usually completing a level or defeating a boss), though the dance itself differs depending on the game, and sometimes there are multiple variations in the same game. Kirby is sometimes joined by two or more other Kirbys (or Helpers/Animal Friends) who mirror or accompany him in his dance.

In Kirby & The Amazing Mirror, Kirby can be joined by up to three differently-colored clones of himself and depending on how many are with him when a boss is defeated, both the dance and the finishing pose will be different.

In Kirby: Canvas Curse, Kirby, who's been transformed into a ball, cannot do the dance himself but rather a group of Kirbies are seen doing it on a black and white screen (with the appearance of an old movie) behind him (on the top screen).

In Kirby's Epic Yarn, Kirby is joined by Prince Fluff for the dance. Both the dance and finishing pose always vary.

In Kirby's Return to Dream Land, the Kirby Dance occurs when the bonus game after each level is finished. It is similar to the other dance variations, but with new dance moves added, such as break dancing, the Robot, and the Moonwalk. This is the first and currently only game to have Meta Knight and King Dedede be able to do the Kirby Dance.

The Kirby Dance appears in episode 42 of Kirby: Right Back at Ya!; Pink-Collar Blues (which is episode 47, Come Home', Dear Waddle Dee, in the Japanese version) where Kirby witnesses King Dedede's Waddle Dee doing the dance, and then finishes the episode by doing it himself.

The music used for the dance was changed in the English dub, however. 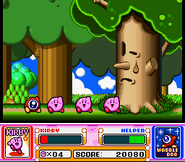 Kirby: Triple Deluxe
Add a photo to this gallery
Retrieved from "https://kirby.fandom.com/wiki/Kirby_Dance?oldid=196457"
Community content is available under CC-BY-SA unless otherwise noted.