Kirby Curtain Call is one of the seven sub-games in Kirby Mass Attack. It is unlocked by collecting up to 20 medals.

When ready, the player can tap the touch screen, starting the game. Once started, the screen will have a certain number of Kirbys with other objects such as Rockys, Beanbons, Mosomosos, or peaches that may cover a Kirby or may be mistaken for one. A strategy to play the game is to tap on a Kirby, causing him to flash. After 3 seconds, the curtain will close, and the player will need to put in onscreen the amount of Kirbys. If the player puts in the correct number, the game will progress to the next stage. However, if the wrong number is put in, the game will end. If the player does exceptionally well, at stages 21 until 40 there will be less time to count the Kirbys. The time to count is always one second at stages 41+. The game goes on infinitely if the player never loses, but Stage 99 is the highest round. 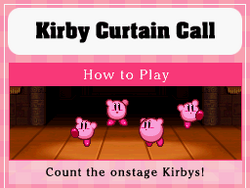 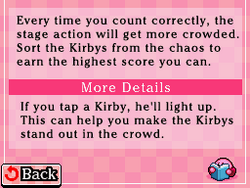 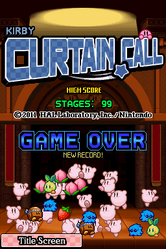 The player gets a Game Over on Stage 99.
Add a photo to this gallery
Retrieved from "https://kirby.fandom.com/wiki/Kirby_Curtain_Call?oldid=335170"
Community content is available under CC-BY-SA unless otherwise noted.