It was later changed to Kirby's Air Ride, which itself was canceled before being reworked as Kirby Air Ride for the GameCube. Kirby Bowl 64 was never released.

Kirby Bowl 64 was announced at the Nintendo Space World (formerly called Shoshinkai) trade show in November 1995. At this point, it was estimated to be 20% finished.[2] In March 1996, GamePro magazine claimed it was scheduled for an April 21 release as a Japanese Nintendo 64 launch title, in spite of having been incomplete when it was shown at Space World. However, the Japanese release of the Nintendo 64 was soon delayed to June, and when it was released, Kirby Bowl did not surface as a launch title. The same magazine also claimed that "Kirby Bowl 64" was a tentative title, which appeared to be true as it later became Kirby's Air Ride.

There appeared to be two predominant playing modes, both of which involves the player(s) racing over undulating three-dimensional terrain with power-ups scattered throughout. One game mode involves rolling a spherical Kirby throughout the course; given its similarities to Kirby's Dream Course (titled Kirby Bowl in Japan), it may have been intended as a sequel to the SNES game. There is a four-player mode, which involves knocking other players out of the bowl-shaped course. Another mode involves Kirby riding on a snowboard or airboard.

Each mode has a timer constantly ticking down. In single-player, Kirby must clear each course before time runs out. In multiplayer mode, the game ends once the time runs out, at which point the results are calculated an a winner is chosen.

The airboard mode was developed further and became the main focus of the game, renamed to Kirby's Air Ride.[1] 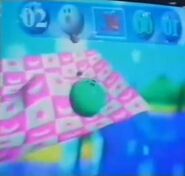 Multiplayer
Add a photo to this gallery

Retrieved from "https://kirby.fandom.com/wiki/Kirby_Bowl_64?oldid=337421"
Community content is available under CC-BY-SA unless otherwise noted.