Kirby races against two Broom Hatters. He swallows a Heat Phanphan and throws Fire on the ground, burning the two and KOing them. Then, actual game clips play. Suddenly, two Sword Knights appear in front of Kirby. With his Sword, he slices the two, KOing them. Kirby then flies off a ledge, where Meta Knight charges toward him, fading to white. Then, Kirby, along with Yellow, Red, and Blue Kirby, race off into the distance.

Kirby Air Ride is a racer in which characters use Air Ride Machines to race through courses, or in a city. Kirby is the starting character, but King Dedede and Meta Knight, as well as different color variations of these characters, are unlocked by ticking certain boxes in the Checklist. Dedede and Meta Knight are only available for use in Air Ride and the Free Run mode (while playing City Trial), always use the same vehicle, and if they crash, they cannot return to an upright position and are trapped in a permanent death state.

Copy Abilities return in Air Ride and City Trial modes, and are collected either by inhaling enemies or by using a Copy Chance Wheel.

In Air Ride, players can choose a machine, the number of racing opponents, and race in 1 of 9 different courses, one of which is unlockable. The player cannot race alone, however. At first, the only vehicle available is the Warp Star, but progress unlocks other Air Ride Machines and playable characters. The player can race in Time Attack mode, which is a race against time over as many laps as the player sets, or Free Run mode, which is a race against the player's best time.

In Top Ride mode, the camera is directly overhead the rider and Machine, and controls remain the same, but gliding is not enabled. Kirby is the only character choice for this mode and he has the option of using the Free Star or the Steer Star. Players have a choice of 7 courses. The player can race against opponents, against time, or against his/her best time.

Players are given a set amount of time to wander around in a large city area. The main objective is to collect as many patches as possible to enhance his/her machine in order to give them an edge when they subsequently compete in the Stadiums. The player always has the option to abandon his/her machine in favor of another one at any time. Events may occur throughout the game. The player can compete in Stadium mode, and Free Run mode lets players cruise around the city with unlimited machine use and no time constraints.

The game's default control scheme involves the A Button, Control Stick, and C-Stick. The Control Stick steers vehicles, executes Quick Spin attacks (rotate left/right), and descends/escalates non-Wheelies in flight (up/down, respectfully). The C-Stick adjusts the camera angle and zooms in/out on Kirby. All the Machines accelerate automatically. Holding down the A Button brakes and fills the Boost Gauge in the lower-right corner of the screen. Releasing the A Button will drain the Boost Gauge, and when the Gauge is full or near-full, the Machine will gain a burst of speed. If Kirby maintains the Boost Gauge at full for too long with most Machines, it will burn out, causing Kirby to recharge.

By slowing down upon entering bends and flying out of them by boosting, players recover lost time spent turning and accelerate back to top speed. Boosting along straights, however, is counterintuitive; this results in an overall lower speed. Certain Machines have unique boost characteristics, such as using it to fuel up, or not boosting at all.

Air Ride Machines glide upon hitting ramps or ledges. While gliding, tilting the control stick up/down pitches the Machine down and up (respectively), and left/right banks the Machine left and right. Holding the A Button brings the Machine to the ground, cancelling the glide.

Players perform Quick Spin attacks by quickly rotating the Control Stick left or right. This is the primary method of attacking. Ramming into other vehicles at high speeds damages opponents in City Trial. If timed right, the player is also able to dodge attacks. Copy Abilities also cause damage, and are obtained from non-player enemies, Copy Panels, and Red Boxes (in City Trial).

In City Trial mode, the player can hold button A and tilt down on the control stick to have the character jump out of his/her vehicle and find a new one to use. On foot, the character may run around and jump, and is able to perform up to 5 consecutive air jumps. When the character touches another machine, he will hop onto the machine automatically. If the player is playing as Kirby and he manages to grab a certain number of patches before this, he will cough up some patches as soon as he collected enough.

He is the default character and his speed depends on his vehicle. Kirby can be used in all three modes of the game. He can also use Copy Abilities and collect patches.

Red, Blue, Yellow, Green, White, Purple, and Brown Kirbys are playable, but four of them need to be unlocked in each of the three modes separately beforehand by completing certain Checklist objectives.

He is the most powerful character and has the highest HP of the three. One swing alone can deduct a large amount of health. Dedede's weapon of choice is his hammer. His main drawbacks are his low speed and high weight. King Dedede can only be used in the Free Ride mode of City Trial and Air Ride. King Dedede cannot use Copy Abilities or collect patches.

Meta Knight is quick and has powerful attacks. He is one of the fastest characters in the game and uses his sword, Galaxia, to attack for high damage. He also glides extremly high, higher than the Winged Star and Flight Warp Star. However, he has very low defense and HP, so he can only take a couple of hits. Meta Knight can only be used in the Free Ride mode of City Trial and everywhere in Air Ride. He cannot use Copy Abilities or collect patches.

The player can play in different colored King Dededes and Meta Knights as well as Kirbys.

For the role of the Machines in Kirby: Right Back at Ya!, see Air Ride Machine

Machines/Characters in both Air Ride and City Trial

The interaction between Glide and Weight attributes of a machine are worthy of elaboration. They are not direct "counters" to each other. The only event where Weight is detrimental is in Air Glider, where the sole determining factor is air time, and Weight directly reduces air time and Glide directly increases it. In most other circumstances, having a fair value of both makes a balanced machine, as both attributes affect more than just air time - Weight affects the amount of traction/skid and turning radius, whether a machine sustains damage in a collision with another one (the heavier the less likely), and Glide, via physics-related factors, determines how easy the machine takes off into the air, and both Weight and Glide affect how fast a machine rises through the air once it starts gliding. Machines made for gliding handle better on the ground and are speedier in the air, therefore too much of one of the attributes is likely to be detrimental to one of those aspects. The balance is determined by the event the machine is participating in - e.g. a Single Race on Checker Knights would demand a good balance, while glide-heavy tuning would be beneficial in Drag Races.

At first, the game was intended to be an Nintendo 64 release, but was cancelled early in its development. It was later revised for the Nintendo GameCube and released in 2003. During 2002 and the early months of 2003, Kirby Air Ride was known as "Kirby's Airland".[3] The game has become a Player's Choice and a Best Seller, as featured on recent case art. Kirby Air Ride also holds the distinction of being the only official full-fledged Kirby racing game to date.

As stated in the game's credits, the released GameCube version of Kirby Air Ride was made using the sysdolphin engine and development tools created by HAL Laboratory. This was the same engine that had been used by HAL for Super Smash Bros. Melee, and Kirby Air Ride contains some similarities stylistically to that game, despite being in a different genre.

Kirby Air Ride has had its own soundtrack CD compilation released in August 2003. Only available in Japan, its title translates to Kirby's Airride Business Trip Sound Test

Kirby Air Ride sold 422,311 copies in Japan and 750,000 in the United States.[4][5] Upon its release, it received mixed reviews from most websites and magazines, with many praising its clean presentation and the originality of the City Trial mode while criticizing its gameplay as being overly simple. It has an average score of 65.58% on Game Rankings.[6] Kirby Air Ride's similarity to other titles released for the GameCube around the same time (most notably F-Zero GX and Mario Kart: Double Dash!!, both of which were also made by Nintendo) resulted in it being categorized as a rather throwaway title.[7] Matt Casamassina of IGN said "this racer only comes recommended as a potential buy to parents who are shopping for their under-nine son or daughter." He also gave the game a 5.2 out of 10.

Despite these criticisms, the game currently maintains a cult following that has built up over the years since its release.[8] 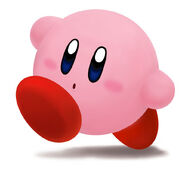 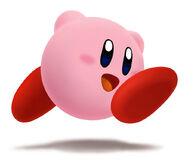 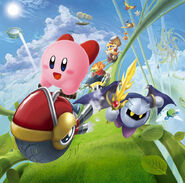 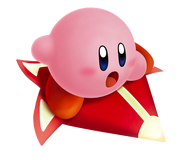 Kirby on the Free Star 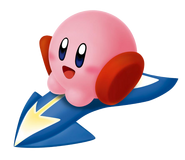 Kirby on the Steer Star 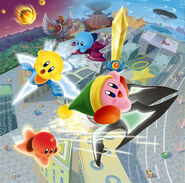 The Hydra and the Swerve Star