Kirby 3D Rumble is a sub-game in Kirby: Planet Robobot, featuring full 3D styled gameplay for the first time in the main Kirby series. The goal of the sub-game is to defeat enemies and collect coins as quickly as possible in order to reach a high score.

On April 12, 2017, an expanded version of this sub-game called Kirby's Blowout Blast was announced as a standalone title on the Nintendo eShop, gearing for a summer release.

The game controls like a standard Kirby game, but with changes made to fit the 3D format. These differences are:

All other abilities, such as inhaling and spitting, work the same way as usual.

The goal of each stage is to defeat all of the enemies as fast as possible and with as many defeated in a row at once as possible. Enemies will line themselves up in ways that several can be inhaled at once and, with correct timing, can be used to defeat multiple enemies in a row.

The stages are set up in a small, flat areas with a few obstacles such as small raised platforms and fences, and enemies appear in succession until they are all defeated, when a Warp Star will appear and take the player to the next part of the stage (each stage being split up into four or five sections, with a boss appearing at the end of each).

Coins are also scattered throughout each stage, which can be collected for more points.

Bronze, silver, gold, or platinum trophies are awarded for different scores, with bronze being the lowest and platinum the highest.

Bonuses are awarded if the player completes certain tasks before defeating the boss. These are: 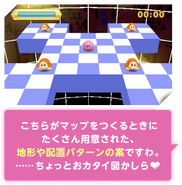 A stage completed with a platinum trophy

Kirby earns a platinum trophy on all stages.
Español 日本語
Community content is available under CC-BY-SA unless otherwise noted.
Advertisement