Kirby 3D is a 3D animated short based on Kirby: Right Back at Ya!. It is about eight minutes long, and features the never-before-seen monster named Lobzilla. Fire Kirby makes a special appearance, as does a new Copy Ability exclusive to the short called Kabuki. Seeing that Nightmare Enterprises is active and Dedede's transporter is operative, this episode may have taken place before episodes 96-100.

The episode opens up with the N.M.E. Sales Guy conversing with eNeMeE about Kirby's recent accomplishments (showing no regard for the fourth wall as they consider 'best-selling video games' and 'an animated series' accomplishments) as they plan how to ruin his latest media endeavor; a 3D presentation based on the anime, specifically what the audience is already watching. King Dedede then complains to the salesman about the company's failures in the past, and that he demands the strongest monster in the company's arsenal. The N.M.E. Sales Guy shows Dedede the cost of the monster (One billion D-bills "cut" down to two billion). Despite the price, Dedede orders the monster anyway, thinking it's a bargain. The monster turns out to be a small shrimp called Lobzilla. At first, Dedede is disappointed with his small size, but Lobzilla shows his power and freezes both him and Escargoon before running away. Next he is backed up against the Cappy Town circle's center tree by Chef Kawasaki, only to blast and freeze him with his breath. He then shows up at the pond that Tuff, Spikehead, Iro, and Honey are playing in and catching lobsters in and blasts them as well. Tiff, Tuff, and Kawasaki then borrow Mayor Len Blustergas' car and drive up to King Dedede's Castle and both Tuff and Kawasaki explain to her about the small shrimp monster that attacked them.

King Dedede then shows Lobzilla that his next target is Kirby and Escargoon uses a Nintendo DS-like remote control to guide a remote-controlled wheeler with cake on it to lure Kirby to the monster. Afterwards, Lobzilla pushes Kirby around several times and his friends arrive just in time to witness it. The monster eventually carelessly rams himself right into a pillar and seemingly knocks himself out once buried in the rubble, much to Dedede's agitation. Just then, Lobzilla shows his true form, which is enlarged and much more monstrous in appearance. Knowing what to do, Tiff calls for the Warp Star, which Kabu sends to Kirby. After fleeing from Lobzilla, Kirby eventually becomes corned on a single slab of rock, and is nearly sliced by Lozilla's large pincers. Fortunately, the Warp Star comes just in time to save Kirby, but even then, Kirby still has to flee from the beast. As the soon becomes cornered again, and Lobzilla attacks with his breath, which releases miniature lobsters attack Kirby by tugging on him repeatedly. Soon, Tiff throws him a torch to suck up. Kirby does so, then jumps into the air while flipping backwards (knocking all of the miniature lobsters off of him in the process), and transforms into Fire Kirby. For a brief period, he is able to combat Lobzilla's breath with his own fire breath, but Fire Kirby is unable to overpower the monster and gets his ability knocked out of him. Tuff is about to toss him another torch when Meta Knight shows up and explains that if Kirby uses Lobzilla's attacks against him, he can triumph.

This gives Tiff an idea, and she jumps on the edge of the rampart she and Tuff were watching from, only to slip and almost fall to her doom. (Though Tuff catches her with his hand at the last second.) She tells Kirby to suck up Lobzilla's babies. Kirby then gets the idea, and he gets back on his Warp Star, just as Lobzilla fires his breath again. This time, Kirby inhales it. Tuff questions if this will work, to which Tiff replies that Kirby will know what to do. After Kirby finishes sucking up the mini lobsters, he transforms into Kabuki Kirby, much to Dedede's and Escargoon's horror (and confusion). The two then circle around each other and they both charge each other. Kabuki Kirby overpowers Lobzilla's breath with a laser from his forehead, which causes the monster to expand, and then smacks him with his rod, causing him to explode. His explosion rains down many shrimps for Kirby, Kawasaki, and even Dedede and Escargoon to enjoy, while both Tiff and Tuff cheer for Kirby's victory. To celebrate Kirby's new ability, The episode then ends with Kabuki Kirby, Tiff, Tuff, and Meta Knight doing their Kabuki poses and the curtain is then closed on them.

Kirby 3D was not broadcast like a traditional Kirby: Right Back at Ya! episode. It was released several times across multiple platforms due to events that surrounded its distribution. 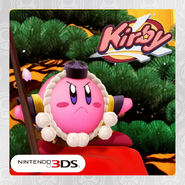 My Nintendo video artwork
Add a photo to this gallery

Retrieved from "https://kirby.fandom.com/wiki/Kirby_3D?oldid=345921"
Community content is available under CC-BY-SA unless otherwise noted.