In the Kirby series, Kirby isn't the only member of his kind. Kirby's species consists of small, 8-inch tall, round creatures. The many known members of the species are Kirby himself, Shadow Kirby, Keeby, and the other colored Kirbies. Many fans suspect that Meta Knight may also be one. In the anime, many of the members of this species are Star Warriors, a group of warriors who fight evil throughout the cosmos. There is no official name for Kirby's species, though. However, very few fans would call a member of Kirby's species simply 'a Kirby'. Many nicknames have been given to this species, such as "cream puffs" and "puffballs". Also, a Kirby Super Star Ultra commercial calls Kirby a "Pink Puff", though this is probably just be just regarding Kirby and not the species as a whole.

In Kirby & the Amazing Mirror, the Kirby species plays a large role. The story begins when Kirby is cut by Dark Meta Knight's sword, causing him to split into four Kirbys each a different color (Pink, Yellow, Red, and Green). The game also features a character called Shadow Kirby, the Mirror World version of Kirby who looks like a gray and black version of Kirby himself.

In any other game, it is either Kirby alone, other known members like Keebyn or the "presumable members" (excluding the anime ones) 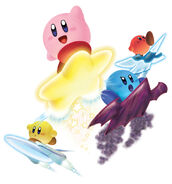 Kirby Air Ride
Add a photo to this gallery
Retrieved from "https://kirby.fandom.com/wiki/Kirby_(species)?oldid=68397"
Community content is available under CC-BY-SA unless otherwise noted.