The Kirby series is an ongoing franchise of video games starring the eponymous character, Kirby, and created by Masahiro Sakurai and developed by the HAL Laboratory. It is one of Nintendo's most popular and best-selling franchises, selling over 35 million units since its debut.[1] The series is known for its bright and artistic setting, cute characters, cheerful and upbeat music, and, most notably: the ability to inhale, swallow, and copy the abilities of enemies.

All the titles in the Kirby series feature a pink, spherical creature named Kirby as the main playable character, hero, and protagonist. The most recurring character in the series besides Kirby is King Dedede, the greedy, hammer-wielding, self-proclaimed ruler of Dream Land; he has appeared in almost every Kirby game usually as a rival to Kirby. Meta Knight is another major recurring character. He appears to be the same species as Kirby (though this is not known) and is a chivalrous but enigmatic warrior who assists the hero on many occasions. Depending on the situation, he sometimes fights Kirby to get the things he desires, or to prevent him from causing a much larger problem. He respects a certain code of honor, and always offers Kirby a sword when fighting with him. Bandana Waddle Dee is the fourth main character in the series, becoming one in the more recent games. He is Kirby’s best friend and is always willing to help when someone is in need. He also has strong ties with his leader, King Dedede. He wields a spear and a blue bandana to separate himself from the others.

The games' fictional setting, Planet Popstar, includes many regions of different climates and terrain, which are home to many different creatures. The areas in each game have unique names, but they fall into categories such as fiery caverns, open meadows, water-filled or submerged areas, icy mountains, and similar nature-based environments.

The Kirby series usually involves the player controlling the pink puffball, Kirby, as he saves Dream Land, Planet Popstar, or other planets from threats.

Kirby can walk, run, and jump, but also perform unique moves, like a slide attack and even inflate himself like a balloon by sucking up air to fly. In every game except Kirby 64: The Crystal Shards and Kirby and the Forgotten Land, Kirby can float indefinitely. Kirby can shoot out a puff of air to attack his enemies after flying. Kirby Super Star introduced guarding, while Kirby: Triple Deluxe introduced a dodge.

In the first game of the series, Kirby's Dream Land, Kirby's main form of attack is inhaling objects or his enemies whole, and spitting them at each other. The first game also featured power-ups like Superspicy Curry and the Mint Leaf, which allowed Kirby to spit fire and air respectively for a limited time to attack his foes. The second game, Kirby's Adventure, and almost every main game after that give Kirby the ability to inhale and swallow his foes to obtain their abilities; for example, swallowing an enemy that is using a sword gives him the Sword ability, and swallowing a flaming enemy gives him the Fire ability. He can use one of these Copy Abilities at a time to give his enemies a taste of their own medicine, and players can try out more than twenty Copy Abilities in most games, sometimes even combining them. Games like Kirby's Return to Dream Land and Kirby: Triple Deluxe give Kirby amplified abilities; in the former, he can swallow certain foes to wield huge hammers or swords, and in the latter, he can eat a special bean to greatly increase his inhale ability — in this state, Kirby can inhale entire trees and trains.

Most Kirby games involve the player moving Kirby to the right of the screen through several levels and worlds that usually follow a theme, like grass, or desert, or lava. Many enemies populate the worlds, some of which are native to one particular world, like fire enemies to lava worlds, or flying enemies to cloud worlds. Some enemies stop Kirby in his tracks, preventing him from progressing until they are defeated. These mid-bosses are usually located near the middle of the level and tend to be larger than normal enemies. They take many more hits and have many more attacks than normal enemies, but can still be swallowed after their defeat, which awards a Copy Ability. The ability that the mid-boss gives is usually necessary to solve an upcoming puzzle that will award some kind of collectible. Bosses are typically giant enemies that seem to govern the entire area. Most bosses can summon smaller enemies to fight for them, and they take even more hits and have even more attacks than mid-bosses. They cannot be inhaled, but they do open the path to the next world after their defeat. Games like Kirby's Dream Land 2 and Kirby Super Star allowed Kirby to summon or partner up with allies that would fight alongside him. Other games, like Kirby & The Amazing Mirror, allow Kirby to travel alongside more of his kind.

Kirby has a set amount of health in the series' games, and food can be found in random areas that will restore his health after he touches an enemy or is hit by an attack. Losing all health results in Kirby losing a life, but 1UPs can also be found in levels. Other hazards, like pits or being crushed, instantly KO Kirby. Invincibility Candy can be found, which stays true to its name and prevents Kirby from taking any damage for a short time. Touching enemies hurts them instead, but instant-death hazards are still effective. Items like Keys and Crackers allow Kirby to pass hazards or attacks enemies without an ability. Levels usually take place in many rooms, and going through Doors allows Kirby to progress. Some doors cannot be reentered after Kirby goes through them the first time. The Warp Star is a large star-shaped item that Kirby can ride to get too far away areas very quickly. In main Kirby games, it steers itself and damages any enemies and breaks through any obstructions in its way. Other objects, such as trolleys and cannons, also serve as a means of transport for Kirby.

The first Kirby game to support amiibo functionality was Kirby and the Rainbow Curse.

These are not games but are Kirby-related themes used to decorate members of the Nintendo 3DS family.

These are not necessarily games but are directly related to Kirby nonetheless.

All music releases have only been sold or made officially available in Japan unless otherwise noted. 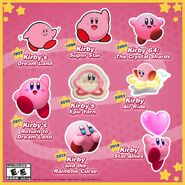