Kirby Wiki
Register
Don't have an account?
Sign In
Advertisement
in: Articles under construction, Games, Remakes,
and 4 more
English

Kirby: Nightmare in Dream Land is a platformer Kirby game developed by HAL Laboratory and published by Nintendo for the Game Boy Advance. It was released in Japan on October 25, 2002, in North America on December 2, 2002, in Europe on September 26, 2003, and in Australia on January 27, 2004. A remake of the 1993 Nintendo Entertainment System (NES) platform game Kirby's Adventure, it features updated graphics and sound, and new sub-games.

Kirby: Nightmare in Dream Land has been re-released on the Wii U Virtual Console in Japan in April 2014, in Europe and Australia in July 2014, and in North America in October 2014.

When the logos show up, one Kirby runs to the left, then 120 of them dash by in the same direction. One of them trips and is kicked off-screen by the second to last Kirby. Although this intro shows many Kirbys, only four were known at the time: Red Kirby, Yellow Kirby, Green Kirby, and regular Kirby. Oddly, the classic intro from the NES game is missing entirely, as is the tutorial when waiting on the title screen.

The game starts with Kirby taking a nap, but something's wrong. Kirby has had no dreams, a truly unusual event in Dream Land. Kirby decides to visit the Fountain of Dreams, where all dreams spring from, to see if anything bad has happened to it. Upon his arrival, he finds King Dedede bathing in its waters. He finds that Dedede has broken the Star Rod, the power source of the fountain, into seven pieces, giving six pieces to his friends and keeping one himself. Kirby decides to track down the fragments to restore peaceful sleep and order to Dream Land.

Kirby manages to defeat King Dedede at the Fountain of Dreams and replaces the Star Rod, but Nightmare appears right after. Nightmare absorbs the powers from the Fountain and flies into the sky. King Dedede inhales Kirby and sends him after Nightmare, where they battle on Planet Popstar's moon. Kirby manages to defeat Nightmare, and the explosion ends up making a large circular hole in the moon, making it crescent-shaped. Kirby returns to the Fountain of Dreams and places the Star Rod back in there, and everything returns to normal with the dreams back in Dream Land. Dedede's prior actions are then revealed to have been part of his plan to protect the Fountain from Nightmare, then Kirby and Dedede reconcile.

Kirby: Nightmare in Dream Land is a traditional platformer Kirby game; the player controls Kirby, whose objective is to get to the end of each stage using Copy Abilities. Each stage is broken up into small sections ending in a door leading to the next section. At the end of each level (roughly 5 or 6 stages) is a boss fight which Kirby must win to get a piece of the Star Rod back.

For the most part, the game plays similarly to its original NES incarnation. Level designs were left mostly intact, with alterations along with some minor retooling of areas to suit the new graphical style.

Some new additions to the remake include 4-player support, 32-bit graphics, a decrease in difficulty, hats for most abilities, the three main sub-games from Kirby's Adventure being replaced by new ones, certain enemies from the original being replaced with new ones, and certain changes to certain levels. In addition, there are changes in the mechanics of certain Copy Abilities (Needle Kirby's spikes do not retract automatically, Wheel Kirby can drive on water, Backdrop Kirby dash-and-grabs enemies instead of inhale-and-grabbing them).

The game supports multi-player, with up to four players. Each player plays as a member of Kirby's species. Player 1 is Kirby, Player 2 is a Yellow Kirby, Player 3 is a Red Kirby, and Player 4 is a Green Kirby.

For Story Mode and Boss Endurance, there is a cooperative mode. No player characters have any differentiation in their abilities, nor do their Copy Abilities (because of this, one may be confused if multiple Kirbys have an ability like Needle or Ice, and thus their skin colors will be uniform if they have those abilities).

In Kirby: Nightmare in Dream Land’s Co-op mode, there are some basic rules:

For all three sub-games, there is a competitive mode.

Kirby: Nightmare in Dream Land contains three new sub-games, replacing the ones from Kirby's Adventure. Many of these games have Kirby competing with differently colored "Kirbys".

Kirby uses a frying pan to hit a bomb to the other Kirby. Each time one misses, the bomb explodes and that Kirby is out (replaced by Bubbles). The last Kirby left wins.

Kirby grinds on rails using the Warp Star to gain speed and race, but slows down if he tries to grind on rough black rails. The sub-game's name is similar to the racing video game Kirby Air Ride, which came out a year later.

Although having the title of Quick Draw from Kirby's Adventure, it is an updated version of Samurai Kirby from Kirby Super Star. The same enemies in the original sub-game are fought, but Kirby will only use the fan as his weapon.

Arena is only available in Story Mode. Kirby can enter every Arena as often as he wishes, and the primary motivation for completing it is to acquire Copy Abilities not available inside Museums and a Maxim Tomato after defeating every mid-boss.

Boss Endurance mode is unlocked by beating the game once.

The player can play through the entire game as Meta Knight, but can't save.

The goal game is carried over from Kirby's Adventure. Kirby jumps on a spring platform. The goal is to press the A button when the platform is at its lowest - this sends Kirby to the top level and nets a 1UP. Otherwise the player scores between 5,000 to 100 points depending on how close the timing is to perfect. Kirby's Return to Dream Land's goal game uses the same mechanic.

Kirby: Nightmare in Dream Land contains 25 Copy Abilities, all of which return from Kirby's Adventure.

Development on Kirby: Nightmare in Dream Land began in summer 2001. It was conceived as a companion game to the Kirby: Right Back at Ya! anime, as during the show's production, there were previously no Kirby games in development.[3] This seems to be why the game's box art, promotional art, and commercials use the anime's graphics. General director Masahiro Sakurai initially resisted the idea of making a remake, instead suggesting a straight port of an SFC/SNES game or a completely original game. The port idea was abandoned because of a fear that a quick rerelease would be viewed by platers as "stale." The Game Boy Advance has a different button layout to the SFC/SNES controller's as well, which would have complicated a port.[4] Whatever game they made would need to be produced quickly to coincide with the release of Kirby: Right Back at Ya!, so instead of creating a new spin-off title as discussed, the team chose to remake an older title. Kirby's Adventure was ideal because it could introduce less-experienced players to the series without overwhelming them with mechanics.[5]

According to programmer Eitaro Nakamura, the development staff struggled to get four-player co-op working sufficiently. It did not work properly until "one or two months" before its deadline.[6] Nakamura has called this feature the most difficult part of the game's development.[7]

Using the Kirby Super Star sprite data as a reference, designer Teruhiko Suzuki expanded upon animations by drawing many frames—so many, in fact, that Sakurai got upset with him multiple times. He told Suzuki to focus on responsive movement over detailed animations, as players care more about the former than the latter. Having too many frames impedes control and makes movement look sluggish.[8]

The team drove to Makiko Ohmoto's home to record voice samples for Kirby. They felt having a pixelated character speak frequently would be unnatural and typecast him a certain way. Most of the recordings went unused, save for two damage clips and three Mike clips.[9]

Due to memory and time constraints, several ideas were scrapped. Suzuki created a fourth sub-game and unique Kirby Dance moves for every Copy Ability, but these exceeded the cartridge's space. New Copy Abilities were planned but ultimately discarded.[10] The Burning and Freeze Copy Abilities were initially merged with Fire and Ice, as they were in Kirby Super Star. When Sakurai declared that these abilities would not be implemented separately, Suzuki pleaded that they be included. He agreed to work through the weekend to finish them, which met Sakurai's approval.[11] 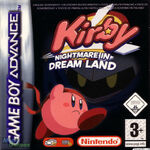 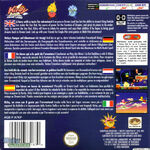 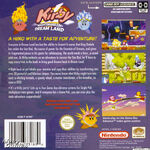