Kirby: Canvas Curse (sometimes written Kirby Canvas Curse and known in English-speaking parts of Europe as Kirby: Power Paintbrush) is a platformer Kirby game developed by HAL Laboratory and published by Nintendo for the Nintendo DS. It was released in Japan on March 24, 2005, in North America on June 13, 2005, in Australia on October 6, 2005, in Europe on November 25, 2005, and in South Korea on September 13, 2007.

The game saw re-release for the Wii U Virtual Console platform in Europe on December 3, 2015, in Australia on December 4, 2015, and in Japan and North America on February 3, 2016 and October 13, 2016, respectively. Kirby: Canvas Curse also received a sequel/successor called Kirby and the Rainbow Curse for the Wii U on January 22, 2015.

One day, a strange portal appears in the sky, and out of it comes a witch named Drawcia. Drawcia casts a spell over Dream Land, turning it into a world of paint. Upon fleeing back into the portal she came through, Kirby gives chase, eventually finding himself in Drawcia's also paint-themed world. The witch curses Kirby, turning him into a limbless ball. After Drawcia escapes, the Magical Paintbrush turns to the player to help Kirby. The player and Kirby set off to find and defeat Drawcia to restore Dream Land to its normal state.

Kirby: Canvas Curse is a platformer with a recurring paint motif. It does not play like a traditional Kirby video game, as it uses the stylus exclusively and no use of the face buttons on the Nintendo DS. The player takes control of a magical paintbrush (the DS stylus), and helps guide Kirby or one of four other playable characters on a quest to defeat Drawcia and restore Dream Land to peace. The objective is to progress through each level to reach a rainbow-colored doorway.

Unlike most previous Kirby games, the player does not directly control Kirby with a +Control Pad, analog stick, face buttons, or shoulder buttons. Instead, the player only uses the stylus and touch screen to control Kirby. The player can draw rainbow lines, which Kirby will roll on, or poke Kirby, to make him do a little speed dash. These rainbow paths can form ramps or bridges for Kirby to cross, or walls to protect him from enemy projectiles. Drawing paths depletes the player's rainbow ink supplies, which recharges slowly while Kirby is in the air or on a path, but quickly when Kirby is on the ground. These paths eventually disappear, even faster if another path is painted. However, the player must either tap on Kirby to cause him to dash forward onto the path, or have the path created directly underneath him, causing him to automatically move forward on it. Occasionally, Kirby will come across a barrier, which prevents the paint lines from being created inside of them, forcing Kirby to do nothing but roll, dash, and use a power (if applicable).

The player can use the stylus to stun enemies by tapping on it. Afterward, the player can either allow Kirby to roll into the enemy with his own momentum or by dashing to defeat the enemy. Defeating certain kinds of enemies by either dashing into them or touching them while stunned causes Kirby to gain one of several special Copy Abilities, which may be used at any time by tapping Kirby himself. This special ability replaces the dash. Once an ability is obtained, the only way Kirby can lose it is either by tapping a button in the bottom left corner or by being damaged.

At the end of each world except for world seven, Kirby must face a boss. In worlds one through six, the first time he completes them, he must face one of each boss - Paint Roller, Kracko, or King Dedede (all of whom must be battled twice). With the exception of the final boss, all bosses are sub-game based. The boss of world eight is the main villain of Kirby: Canvas Curse, Drawcia Sorceress.

Portions of the game can be played in Rainbow Run mode, which is unlocked in Medal Swap. In Rainbow Run, fast speed (Time Trial) and limiting the amount of paint used (Line Trial) are key factors in the player's success, awarding the player with Medals if he achieves the goal.

Main Game features Kirby in ball form rolling through the painted world in pursuit of Drawcia, the witch responsible for transforming the world and turning him into a ball. Here, Kirby is moved through the powers of the Magical Paintbrush, which taps him to get him moving and paints lines that allow him to traverse the world with ease. Kirby can also obtain Copy Abilities from enemies by dashing into them or rolling into them while they are stunned from the Magical Paintbrush's touch. There are seven main levels, each with three stages, punctuated by a Boss Game when all three are cleared; hidden in each stage are three medals. Once all seven levels are cleared, Kirby enters Drawcia's domain in eighth and final level, The World of Drawcia. After defeating Drawcia, the player can play through the game with other characters; clearing all levels with a different character also rewards medals.

After clearing a level, it becomes available in Rainbow Run; as such, the game's first level, Reddy Land needs to be cleared unlock Rainbow Run. Rainbow Run allows the player to play through portions of cleared stages under one of two conditions: limited time, or limited ink. Meeting each mode's conditions will reward up to three medals depending on the player's performance. The World of Drawcia is replaced by the Special Course, which features eight stages that must be unlocked.

Time Trial features the player trying to get through part of a stage as quickly as possible. There are three time goals, with each harder than the last. Achieving a time less than one of the goals will reward a medal for each goal surpassed.

Line Trial features the player trying to get through part of a stage while consuming as little ink as possible. There are three ink goals, with each harder than the last. Having more ink remaining than one of the goals will reward a medal for each goal surpassed.

After clearing Level 2 of a Boss Game, it becomes available as a subgame. Each subgame features a different style of gameplay, with the main goal to score as many points as possible. Each subgame has three levels of difficulty, as well as performance rankings as low as "I" and as high as "AAA." Getting an "A" rank or higher on Level 3 of a subgame rewards a medal.

A subgame similar in concept to Kirby's Block Ball. Kirby progresses through vertical stages by defeating all of the enemies in a given stage. Kirby continuously bounces around in this mode, and can only be controlled by drawing paddles that he can bounce on to change his trajectory or velocity. In Levels 1 and 2, this subgame is puctuated with a battle against Kracko Jr. and Kracko respectively in Stage 5 of the subgame; in Level 3, this subgame can theoretically continue indefinitely, with 16 unique stages that repeat once all are completed.

A subgame similar in concept to Gourmet Race. Kirby rides a Mine Cart and races against King Dedede, who also rides a Mine Cart. Kirby can obtain food to give him a speed boost, with obtaining two food items simultaneously giving him a maximum speed boost. Kirby rides on a line creasted by a generator, which the player can control the height of in order to adjust Kirby's position in the course. This subgame ends when Kirby finishes the course. In Levels 1 and 2, this subgame is 3 and 4 courses long respectively; in Level 3, the subgame has three laps of five courses each, for a total of 15 courses.

In Paint Panic, Kirby is being pursued by Bombers while Paint Roller draws various paintings. Using the Magical Paintbrush, the player must recreated Paint Roller's drawings in order to keep Kirby away from the approaching Bombers. A player's drawing is rated on three criteria: speed, accuracy, and whether it was completed in a single stroke. In Levels 1 and 2, this subgame has 10 and 15 questions respectively and is puctuated by tapping a series of blinking panels that eventually ends in Paint Roller's demise; in Level 3, there are 99 questions, with a blinking panel game occurring after every 10 questions.

Medal Swap allows the player to use collected medals to earn various rewards. Some are minor and don't affect gameplay much, such as songs or different ink colors. Other rewards affect gameplay more majorly, such as Life Boosts for Kirby, additional courses for Rainbow Run, and unlockable playable characters.

Unlocked after clearing the game with all five playable characters, the Jump Game, which otherwise is only accessible upon clearing a stage, can be played at any time, albeit only with Kirby. The main goal is simply to get a high score, although a medal can be found on the 1500 inch mark.

In Options, the player can view various miscellaneous features generally not associated with main gameplay.

In Settings, the player can change ink type (if any are unlocked), the sound settings (stereo, mono, headphones, and surround) and ability to change song type between "Normal" and "Old School" (if unlocked), or the ability to detect nearby PictoChatters.

In Training, the player is given various lessons of how to play the game. These are: the Touch Dash, touch devices and stage devices, turning around, riding lines, Copy Abilities, and creating walls to block attacks. Training additionally reveals how underwater controls function.

Sound Test allows the player to listen to the game's music tracks and sound effects. All sound effects are available by default, but most of the music needs to be unlocked.

Each character in Kirby: Canvas Curse has a different property. Kirby is the only character whose max HP can be increased. Waddle Dee is faster than Kirby, but can't copy abilities. Waddle Doo permanently uses Beam. King Dedede has a hard-hitting hammer attack and the highest HP out of any character, but is very slow and heavy. Meta Knight has his signature sword attack and is fast and light, but has only three health.

Kirby: Canvas Curse spans eight levels, with all but the last one having three stages:

A Kirby: Canvas Curse demo cartridge was released to Nintendo DS kiosks at Japanese retailers. In it, Plant Plain, Ghost Grounds, and the Tutorial are the only playable stages, all selectable withing the main menu. The Copy Abilities featured are Balloon, Beam, Burning, Spark, and Wheel. When finishing a stage or being KO'd enough times, the player is directed to a "Thanks for playing" screen, then to the title screen. The player can collect Medals, although they have no use whatsoever.

Kirby: Canvas Curse has received positive critical acclaim since its release, holding a critical score of 86 on Metacritic[4] and 87.34% on Game Rankings based on 61 reviews.[5] 1UP called it "genuinely excellent", saying that "it's a welcome reinvention of gaming's most overplayed genre" and later concluded that Kirby: Canvas Curse is "the DS's first great game." The stylus gameplay has also been noted, with IGN hailing it as "incredibly innovative," GameSpy saying it is "quite rewarding", and GameSpot calling it is "a satisfying part of the gameplay."

The game has drawn its criticism, however, with a few sources claiming that although the game was innovative, it was not especially entertaining, with Play Magazine editor noting that "It's innovative... but for me, that's not enough." 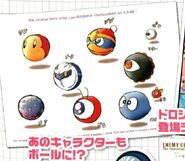