Kirby's Block Ball is a breakout-style Kirby game developed by HAL Laboratory and co-developed and published by Nintendo for the Game Boy. It was first released in Japan on December 14, 1995, in Europe on December 25, 1995 and in North America on May 4, 1996 in North America.

Kirby's Block Ball re-released on the 3DS Virtual Console In Japan in 2011 and other regions in 2012.

King Dedede steals the five Sparkling Stars and hides them inside his castle. Kirby flies his Warp Star up to Blockworld, a floating archipelago, and conquers each stage in an attempt to reach Dedede. Ten main stages comprise Blockworld, plus the king's stronghold. Each stage is ruled by Dedede's henchmen. Defeating them without clearing the border line only grants access to the next stage.

If all ten main stages are cleared merely meeting this condition, the bad ending sequence rolls; Dedede's face ominously hovers above Blockworld, and the player is presented the message, "Let's try again!" In order to unlock Stage 11 and get the true ending, the player must clear the border line on the first ten stages. Each stage requires a different score. Kirby completes the objective and a bridge to the castle forms. After one final stage, the hero defeats his rival. The Sparkling Stars destroy Dedede's stronghold and reveal that a fountain is built on its foundation. Kirby dances in the fountain's gushes as the credits roll.

Kirby's Block Ball strays away from the normal Kirby platforming style, and is a breakout-style game featuring enemies, boss battles, and sub-games. The object of the game is to keep Kirby in play by bouncing him against paddles on different sides of the screen, as well as prevent Kirby from hitting spikes. These KO Kirby in his ball form or make him lose his Copy Ability. The number and position of paddles varies between areas, as well as the number of spiked walls.

In each stage, Kirby bounces around in an area filled with blocks and enemies. When Kirby collides with a block or enemy, it is eliminated. When enemies are KO'd, they transform into food, which yield bonus points. Some, however, transform into panels that affect the blocks in the area. Further, certain enemies yield one of the four Copy Abilities that Kirby can obtain.

The player moves onto the next round when the blocks and enemies are all cleared. There are 11 total stages -- the last is unlocked by clearing the border line on each level. Each stage consists of five areas. The first three areas of each stage are normal block areas. The fourth is an area containing a mid-boss battle with Star Blocks that can be collected to protect Kirby from spike-covered walls in the upcoming boss battle (and grant an extra life if all are collected). The final area is a battle against the stage boss.

Items and power-ups appear in the stages to help Kirby succeed. These include bombs to destroy certain blocks, panels that switch the color of the blocks on the screen (altering its point value), panels that split Kirby into two Kirbys, Bonus chances that allow Kirby to pass through blocks without ricocheting, and Warp Stars that take Kirby into the sub-game hub, with 4 sub-games to choose from in which the player can get extra lives. Hitting Bouncy will allow the player to get the Kirby Changer panel, which lets Kirby get an ability of choice.

There are several ways of getting points in each stage. Different kind of blocks give the player different point values; white square boxes give 50 points, white colored rectangles give 100, and big white boxes (composed of small white boxes after getting hit) give a total of 400. all of these values double when the blocks are colored. there are also blocks that can only be broken with certain conditions, like having to use an ability or giving Kirby a boost with the A button. Enemies KO'd by Kirby turn into tasty treats, which give the player bonus points if obtained, three different kinds of food can be obtained, Cupcakes (2000 points), Lolipops (1500 points), and Apples (1000 points). Bonus Chances and sub-games also grant extra points and lives at the end of each stage.

Toward the beginning of the development of Kirby's Block Ball, HAL Laboratory inspected the game and told the design team that it "wasn't like Kirby." The team spent approximately half a year overhauling major parts of the game to meet HAL Laboratory's standards.[3] 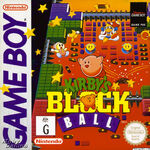 Retrieved from "https://kirby.fandom.com/wiki/Kirby%27s_Block_Ball?oldid=333664"
Community content is available under CC-BY-SA unless otherwise noted.