Kirby's home
Kirby's house is a small, dome-shaped house located in the beautiful green fields of Dream Land that debuted in Kirby's Dream Course. It was supposedly built for Kirby by Dream Land's residents, in gratitude for returning the food stolen by King Dedede after the events of Kirby's Dream Land.[1]

In Kirby: Right Back at Ya!, the inside of Kirby's house is like any other regular house. It has a small room with a chimney with a fireplace as well as a small futon, a single window, an orange floor, a bed, and a blue carpet. It has a star above the door in the manga.

Kirby's house generally only appears in intros, endings and other cutscenes in Kirby games. Its first in-game appearance was in the story intro for Kirby's Dream Course, and since then, it is seen in Kirby's Star Stacker as well as in the ending for the Milky Way Wishes sub-game in Kirby Super Star and its remake, Kirby Super Star Ultra. It has appeared most recently in the opening and ending cutscene of Kirby: Triple Deluxe.

Kirby's house is also a location in the anime. In the second episode, A Blockbuster Battle, Kirby's friends were trying to find him his own place to live, since Tokkori didn't like the idea of letting him live in his nest. Eventually, Tiff decided to build Kirby his own house. At first, Kirby was going to live in his own tree house, but King Dedede destroyed it just before summoning Blocky on him. Luckily, after Blocky's defeat, Kirby's friends built a second house for him to live in, though Tokkori decided he liked the house and offered to make a trade with Kirby, letting him sleep in his nest while Tokkori moved into his house, though there were times when Kirby would also sleep in his own house with his cranky bird neighbor.

Kirby's house was shown a couple of times after the end of the second episode and has even been destroyed sometimes, only to be rebuilt again later. 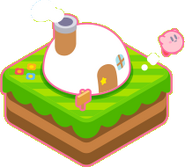 Kirby Pupupu Train website
Add a photo to this gallery 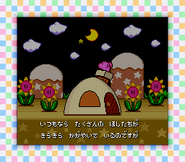 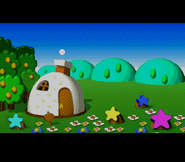 Kirby: Right Back at Ya! (interior)

Kirby: Triple Deluxe (covered by Dreamstalk)
Add a photo to this gallery

Retrieved from "https://kirby.fandom.com/wiki/Kirby%27s_house?oldid=337673"
Community content is available under CC-BY-SA unless otherwise noted.