Kirby's Star Stacker is a puzzle Kirby game developed by HAL Laboratory and published by Nintendo for the Game Boy. It was first released in Japan on January 25, 1997, in North America on July 14, 1997, and in Europe on August 28, 1997.

The game received a remake for the Super Famicom in Japan under exactly the same Japanese title. It also was rereleased on 3DS Virtual Console in in Japan on May 23, 2012, in Europe on August 30, 2012, and in North America on January 17, 2013.

Blocks fall in pairs from the top of the play area. There are six types of blocks. Three are Friend Blocks, based on Kirby's Animal Friends from Kirby's Dream Land 2: Rick the hamster, Coo the owl, and Kine the sunfish; Star Blocks; Bomb Blocks; and Hard Blocks.[2] The object of the game is to score stars by placing one or more stars between two matching Friend Blocks, which causes the Friend Blocks and the stars to disappear, adding to the score total. This can be done vertically or horizontally.

At the start of a game, the arena with be filled with various blocks. The arena has six columns and nine rows. A pair of blocks will begin to fall from the third and fourth column once the round starts. The blocks can be rotated clockwise by pressing A or counterclockwise by pressing B. Pressing right or left will move the pair of falling blocks in the desired direction. Pressing down will cause them to fall faster. Upon landing, the next pair of blocks will begin to fall. Upon having a star/stars positioned between like animal friends, the star(s) will disappear along with the Friend Blocks used to eliminate them. These stars will be subtracted from the number displayed on the right side of the screen (in Round Clear mode) or added to the number (in the case of all other modes). Any blocks above the blocks that were destroyed will fall. This can cause chain reactions under certain circumstances. Having two or more like Friend Blocks adjacent to each other (excluding diagonals) will cause them to disappear. This can also contribute to chain reactions.

By causing a chain of five to occur, the 1UP tune will play; a chain higher than five will play a higher pitched version of the first few notes of the fanfare theme.

Periodically, a trembling fist will appear on the right side of the screen. After the player places the pair of blocks (which can result in stars being eliminated or even a chain), the fist will slam down and a new row of blocks will appear, raising all the other blocks up by one. This can be both helpful and harmful. If can help by producing more Friend Blocks, allowing for stars to be destroyed, but if can also be harmful by limiting space and possibly causing the player to fail the round. Any Friend Blocks that are produced from this action will not be under a like Friend Block unless another is between them.

As the difficulty increases, new blocks are introduced. The Bomb Block acts like a Star Block, but will destroy the row it's in upon being activated; blocks being destroyed in the explosion will not count towards the score; it first appears in Hard mode in round 5. The Hard Block acts like a star, but it needs to be "sandwiched" twice to be eliminated; it first appears in Very Hard mode in round 4.

The right side of the screen displayed the current difficulty mode (based on Kirby's facial expression); the round number; the pair of blocks that will fall next; King Dedede's head (Round Clear), Tick-Tock Jr. (Time Attack), or Mr. Star in other modes, both of which will be replaced by the fist periodically; number of stars that need to be eliminated (Round Clear) or number of stars currently eliminated (all other modes); number of chains (if applicable); and Kirby himself. He walks in place during most of the game, shoots bonus stars when chains are created, panics when there are only two rows remain in the middle columns, falls over when he loses a round, and flies away on his Warp Star when a difficulty level is completed. In Round Clear, if three or less stars are left to end the round, King Dedede appears excited; if there are two rows left in the middle columns, he begins laughing hysterically.

There are four game modes in Kirby's Star Stacker.

Round clear is the main mode of the game, and it is split into five difficulty modes. Normal mode has eight rounds and is effectively a tutorial. Hard mode, Very Hard! mode, and Super Hard mode each have sixteen rounds. Insane! mode, the game's hardest difficulty setting, has fifty rounds, and is not available by default. It can only be played when all other modes are completed.

Rounds are cleared by eliminating a set number of stars. Each stage takes on a theme, such as forests or the galaxy. When each round is cleared, the player is rewarded with special artwork using the themes of each stage.

VS is the game's multiplayer mode. It can only be played by connecting two Game Boy systems together.

Challenge is an endless mode. The object of this mode is to eliminate as many stars as possible before the stack of blocks reaches the top of the screen; after every 100 stars scored, the game speeds up slightly and the music changes. In-game artwork is awarded depending on the amount of stars collected, often encouraging the player to try harder next time (until the final picture is received).

The goal of time attack is to eliminate as many stars as possible in 3 minutes.

There is a high score table for the Challenge and Time Attack modes, showing the top three scores for each mode. 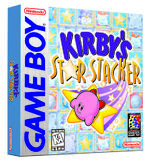 Challenge artwork (Insane!)
Add a photo to this gallery

Retrieved from "https://kirby.fandom.com/wiki/Kirby%27s_Star_Stacker?oldid=343574"
Community content is available under CC-BY-SA unless otherwise noted.