Kirby's Dream Land 2 is a platformer Kirby game developed by HAL Laboratory and published by Nintendo for the Game Boy. It was released in Japan on March 21, 1995, in North America on May 1, 1995, in Europe on July 31, 1995, and in Australia on November 22, 1995. The third main installment in the Kirby series (and second of the Dream Land saga), it continues the adventures of Kirby from Kirby's Dream Land and Kirby's Adventure, adding three Animal Friends to aid Kirby in battle.

Kirby's Dream Land 2 was also re-released on the Nintendo 3DS Virtual Console in 2012.

The plot follows Kirby, a resident of Dream Land. The rainbow bridge that connects the Rainbow Islands has been stolen by an evil being called Dark Matter, who, intent on conquering Dream Land, has possessed King Dedede. With his trusty Warp Star, Kirby sets out to defeat Dark Matter, accompanied by his new Animal Friends.

When Kirby confronts the possessed king and defeats him without having collected each level's Rainbow Drop, the player encounters the game's "bad ending"; an enemy roll-call is shown as Kirby and the Animal Friends traverse back home in the rain. At the end of the roll-call, a mysterious silhouette of a figure is shown, labeled "!?", and Kine will look up quizzically.

The game's "good ending" is obtained by collecting all Rainbow Drops. Once Dedede is defeated, the Rainbow Drops will combine above Kirby to form the Rainbow Sword, and Kirby will rise to space to face Dark Matter, first in his swordsman form and then in his standard form. After the defeat of Dark Matter, Kirby begins to fall from the sky. As the Animal Friends and King Dedede look on, Kirby grabs the Rainbow Sword and uses it to form a rainbow across the sky.

Kirby's Dream Land 2 is a platforming video game in which Kirby is able to walk, swim, and fly throughout a variety of levels, using several allies and enemy powers in order to reach the goal at the end of each level. However, a variety of obstacles lie in his path. These obstacles range from pits to enemies. If Kirby touches an enemy or is hit by an enemy's attack, Kirby will lose one bar of health (out of six total health points).

Kirby's basic abilities include walking, jumping, floating, swimming, Air Gun, and inhaling. Flight involves inhaling air (up on the +Control Pad), followed with the press of the jump button which will make Kirby fly. By continuously pushing the jump button, Kirby can reach any height (unless something prevents him from reaching that height). At any time when Kirby has inhaled air, he can exhale by either landing on the ground or by pressing the B button. When the air is released, Kirby will exhale a puff of air, which can be used to damage enemies or destroy blocks.

Inhaling objects, enemies, and food is Kirby's trademark ability. To inhale anything, the player must hold down the B button. Kirby can then indefinitely inhale, and if an enemy, object, or food is in range, Kirby will inhale it into his mouth. When food is inhaled, it is automatically swallowed and will heal Kirby if he has any damage. When Kirby inhales an enemy or object, it remains in his mouth. At this point, Kirby can shoot them out as a star (causing damage to anything in its path), or simply swallow them. When certain enemies are swallowed, Kirby will gain their ability, such as ice breath or the ability to turn into a stone.

The game is also playable on the Super Game Boy, which gives slight changes to the game. These include a custom color scheme, a special game border, and a few new sampled sound effects, such as the sound of wind blowing. These are not included in the 3DS Virtual Console version.

Kirby's Dream Land 2 introduces three new allies to aide him in his adventure: Rick the Hamster, who allows Kirby to ride on his back; he runs faster and doesn't slip on ice; Coo the Owl, who can carry Kirby and fly through harsh winds and allows Kirby to inhale while flying; and Kine the Ocean Sunfish, who can carry Kirby in his mouth and swim through waters (even against currents) with ease (although he performs poorly on land), with him Kirby can inhale underwater. Whenever Kirby is aided by an Animal Friend, his current power is altered. For example, if Kirby has the Spark ability while he rides on Rick, he can use an attack very similar to the beam attack from Kirby's Adventure.

Animal Friends are always found in small rooms with enemies in it, they are hanging from the roof inside a sack. In order to free them, Kirby must defeat all enemies in the area, including mid-bosses. If Kirby beats a room in which he is supposed to get an animal friend he's already with, the sack will instead contain Gooey, a friendly blob who will heal the character partially; on rare occasions, a female version of Gooey will appear, who will grant Kirby a 1UP. Her appearance adds 1% to the completion of the game. (In the Japanese version, this female Gooey is instead Chao.)

With the exception of King Dedede's stage, after defeating a boss, the player be able to re-enter the stage to play a star-catching mini-game. Depending on the boss level, Kirby must evade any harmful objects while catching all the stars; this is required to achieve 100% completion. If Kirby gets hit once, he will be taken out of the level immediately and the stage's entrance will be closed, only opening again when the player beats any other level.

After achieving 100% completion, three options are unlocked in the main menu: the music room, Boss Endurance, and a more practical version of Bonus Chance. In this iteration, the player goes through the bosses' respective courses one after another. After completing them, a screen shows the total amount of stars collected, along with a corresponding performance grade.

The goal game is similar to that in Kirby's Adventure. Both times, the player must launch Kirby with the right timing, but now to defeat foes and earn items. The Easter egg that grants Kirby 30 1UPs (achieved by landing on clouds 7-1 in order) is not present.

There are 8 Copy Abilities in Kirby's Dream Land 2, all of which return from Kirby's Adventure except Rainbow Sword.

Kirby's Dream Land 2 was a hit and became a bestseller for Game Boy, selling more than two million units worldwide. [2] It was also a critical success, holding a score of 81.70% on Game Rankings based on 4 reviews.[3] 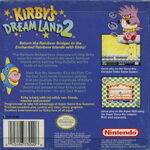 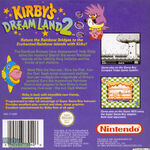 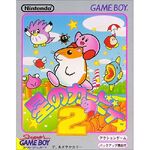 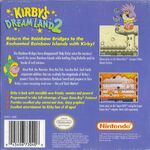 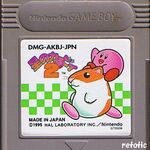 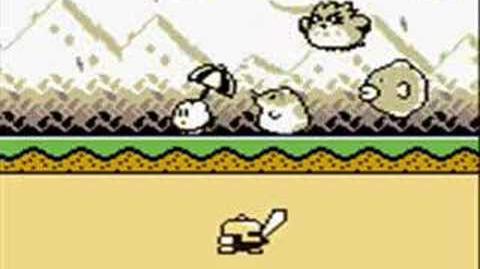