Kirby's Blowout Blast is a battle-action Kirby game developed by HAL Laboratory and developed by Nintendo as a Nintendo eShop exclusive for the Nintendo 3DS family of systems. An upgraded, stand-alone version of the Kirby: Planet Robobot sub-game Kirby 3D Rumble, it has larger stages with new enemies and bosses.

Kirby's Blowout Blast has gameplay similar to that of Kirby 3D Rumble; it has the player control Kirby as he navigates 3D environments and defeats waves of enemies. The game contains six levels, each with at least four stages, and over 25 stages overall. All stages in each level must be completed at once in order to complete the level.

Inhaling multiple enemies allows Kirby to launch a large Blaster Bullet capable of wiping out many enemies at once. At the end of each stage, Kirby is awarded a bronze, silver, gold, or platinum trophy based on his performance. As Kirby progresses through the game and earns gold trophies, EX stages are unlocked that are more difficult to complete. A boss waits at the end of each level.

The game adds a main plaza area that contains Star Blocks for Kirby to inhale and serves as a hub through which he may access all of the game's stages via Warp Stars. Using a Kirby series amiibo allows the player to build a statue in the main plaza that plays different music.[2] Additionally, using the C-Stick on the New Nintendo 3DS or a New Nintendo 3DS XL systems allows the player to change the camera angle. 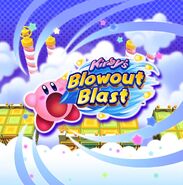 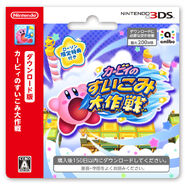 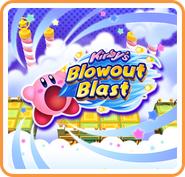