Reportedly, the game's development was very lengthy, and was mostly quiet. The game's status was frequently changed until it was finally labeled as "Cancelled". Years later, it resurfaced on the Nintendo GameCube in the form of a short video preview in March 2003 at the annual DICE summit in Las Vegas. Kirby Air Ride was later officially announced for that system, with gameplay and concepts which were different from what was seen in the Nintendo 64 footage, and several enemies as well as playable characters that were in the Nintendo 64 version were not featured in the Nintendo GameCube version.

When Kirby Bowl 64 was renamed to Kirby's Air Ride, the game appeared to shift its focus towards the snowboard/airboard levels, with no new information regarding the sphere or multiplayer modes. The snowboard/airboard levels were built upon, with new information showing more developed landscapes, a health meter, and a four-player multiplayer mode which was apparently meant to be the game's main focus,[3] a feature that the final product retains. The snowboards and the airboards were replaced with rideable stars, which were not unlike the Warp Star. The player could also stop their vehicle, jump off of it and explore the environment on foot, another feature that was kept for the final release.[4] [5] The background shown in the footage was the overworld map screen from Kirby Super Star’s Dyna Blade sub-game. 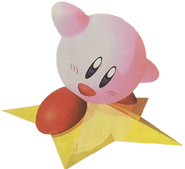 The only screenshot of the split-screen mode in Kirby's Air Ride.