Kirby Wiki
Register
Don't have an account?
Sign In
Advertisement
in: Articles under construction, Games, Originals,
and 3 more
English

Kirby's Adventure is a platformer Kirby game developed by HAL Laboratory and published by Nintendo for the Nintendo Entertainment System. It was originally released in Japan on March 23, 1993, in North America on May 1, 1993, in Europe on September 12, 1993, and in Australia on January 1, 1994. The second main installment in the Kirby series, it is best known for being the first game in the series to feature Copy Abilities, which are now synonymous with Kirby and the Kirby franchise, making this game at the very least as influential as Kirby's Dream Land in shaping successive games in the decades to come.

The game was remade in 2002 as Kirby: Nightmare in Dream Land for the Game Boy Advance, and the original was re-released in 2007 for the Wii Virtual Console. A second remake titled 3D Classics: Kirby's Adventure was released for the Nintendo 3DS, being one of six games given similar treatment by Arika. The game was also re-released on the Wii U Virtual Console and is one of the 30 games packaged with the NES Classic Edition console. It was also added as one of the NES games playable using the Nintendo Entertainment System – Nintendo Switch Online service.

The game starts by teaching the player how to draw Kirby, starting by drawing a circle, then adding the eyes, the mouth, as well as the hands and feet. Afterward, a pink paintbrush swipes across him twice, coloring him in, likely a reference to how Kirby's Dream Land was on the Game Boy, which displayed the game in monochrome. The logo comes up with Kirby sitting in the middle, smiling and occasionally waving at the player.

The game starts with Kirby taking a nap, but something is wrong. Kirby has had no dreams, a truly unusual event in Dream Land. Kirby decides to visit the Fountain of Dreams, where all dreams spring from, to see if anything bad has happened to it. Upon his arrival, he finds King Dedede bathing in its waters. He finds that Dedede has broken the Star Rod, the power source of the fountain, into seven pieces, giving six pieces to his friends and keeping one himself. Kirby decides to track down the fragments to restore peaceful sleep and order to Dream Land.

Kirby gets harassed by enemies and the Meta-Knights along the way, but manages to find King Dedede at the Fountain of Dreams. After Dedede is defeated, the king grabs Kirby and begs him not to place the Star Rod back atop the Fountain of Dreams. Kirby bats him aside and does so anyway, accidentally releasing Nightmare. Nightmare absorbs the powers from the Fountain and flies into the sky while the two panic. King Dedede then inhales Kirby and sends him after Nightmare, where they battle on Planet Popstar's moon. Kirby manages to defeat Nightmare, and the explosion ends up making a large circular hole in the moon, making it crescent-shaped. Kirby returns to the Fountain of Dreams and places the Star Rod back in there, and everything returns to normal with the dreams back in Dream Land. Dedede's prior actions were then revealed to be part of his plan to protect the Fountain from Nightmare, and Kirby and Dedede reconcile.

Kirby's Adventure’s story is linear. Each stage is a side-scrolling platformer, with various enemies scattered around it, and each stage finishing with a Goal Game. When one stage is cleared, the door to the next stage appears in the level's lobby. What makes the game lobby unique from most other games is that it is part of the actual game. The game lobby is played like the side-scrolling stages.

The entire game is made of seven individual lobbies each with five to seven stages. Every last stage is a boss battle for a piece of the Star Rod, and after a boss is defeated, the boss room becomes the entrance to the next level.

There are also sub-games in each lobby. Each level has one to three different sub-game rooms. Depending on the player's progress through the sub-games, they may earn bonus points or extra lives. A common one of these is the Museum, in which Kirby can swallow one or two different enemies for a free Copy Ability (the enemies cannot hurt him in this room). There is also the Arena, in which Kirby can fight a mid-boss to earn a Maxim Tomato and the mid-boss' ability, as well the Warp Star Station, in which Kirby may take a Warp Star directly to another level. Sometimes, these bonus rooms must be unlocked through the use of secret switches in various stages.

Beating the game unlocks a V.S. Boss! mode on the main menu in which the player can face every boss in a row, and a Bonus Games mode in which the player can play each of the sub-games separately. Pressing all of the switches in the stages to unlock all of the sub-games in the levels will bring the game to 100% completion on the main menu and unlock the Extra Game. Beating the Extra Game will unlock the ability to Listen to Sounds for the game.

After each stage, the player plays a Goal Game where Kirby jumps on a spring platform. The goal is to press the A button when the platform is at its lowest--this sends Kirby to the top level and nets a 1UP. Otherwise, the player scores between 5,000 to 100 points if Kirby reaches any of the lower 6 platforms, depending on how close the timing is to perfect.

Copy Abilities are first introduced in Kirby's Adventure, alongside Mix.

The 3D Classics version of Kirby's Adventure is much more faithful to the original game than the previous remake, Kirby: Nightmare in Dream Land. At first glance, it appears to be a direct port, but there are plenty of differences between this edition and the NES game. As with all of the 3D Classics re-releases, it was developed by Arika.

The most noticeable (and advertised) difference is the optional pop-up book-styled screen. There is also a different audio filter, meaning that sound effects usually don't "cancel" out. All of the game's slowdown was removed (noticeable with Spark). There are also slight touch-ups to the graphics such as flash effects (i.e. Crash), redesigned menus, slightly enhanced animation, water translucency, gradient skies and light peering through most obvious doors, as well as a few minor timing alterations (mostly in Goal Game and the sub-games). Many of the glitches removed in the French version and the first remake are also fixed in this edition. Other minor gameplay changes include customizable controls, the fact that Kirby will no longer waste any time in performing his victory dance, and Kirby will always be able to run across block-wide gaps (which was a point of frustration in the original game).

Though the game does generally have more polish, there are some exclusive oversights - for example, Kirby's Vitality refreshes after the Heavy Mole fight (resulting in easier difficulty in V.S. Boss!), the game's total score is not saved during Extra Mode, and King Dedede can actually act as a Maxim Tomato using an exploit.

Challenges based around Kirby's Adventure are included in this game. 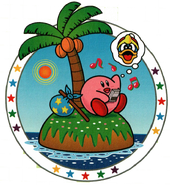 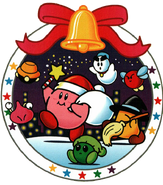