Kirby Wiki
Register
Don't have an account?
Sign In
Advertisement
in: Articles in need of clean up, Enemies, Characters,
and 11 more
English

King Doo is a mid-boss in the Kirby series, debuting in Kirby's Return to Dream Land. He gives the Beam ability when inhaled.

King Doo is a very large Waddle Doo, about four times the size of a regular one. Unlike most Waddle Doos, however, he has a yellow body, and his eye is purple rather than black. Instead of two strands of black hair above his eye, King Doo has a large, brown ponytail that extends from his forehead. His feet are orange and pointed at the end, unlike Waddle Doo's round feet.

In Extra Mode, King Doo is known as King Doo EX and gains several color changes: his body becomes white, his feet a dark shade of red, and his iris a hot pink tone instead of purple. His hair has become blond instead of brown.

In Kirby: Planet Robobot, King Doo has been mechanized by the Haltmann Works Company and features a metal covering over the top of his head, secured in place by four bolts. King Doo's appearance is otherwise unchanged.

King Doo attempts to run into Kirby, creating stars for Kirby to use against him. He also fires his Beam Whip attack in broad arcs, similar to Waddle Doo. Unlike his smaller counterparts, however, King Doo is capable of performing the beam attack while jumping to hit the area beneath him. He can also unleash charged-up Wave Beams along the ground, similar to Beam Kirby. Since Kirby is unable to inhale these attacks, they must be avoided.

In Kirby: Planet Robobot, King Doo gains a new attack in which he fires several arcing Wave Beams into the background and foreground. These beams will arc back onto the ground, and will explode on impact.

In Extra Mode, King Doo retains many of his previous attacks, but is faster and does more damage. In addition, he can now fire his Wave Beams upwards at a diagonal angle to hit Kirby if he is in the air. King Doo EX also has a new attack in which he charges up, jumps high into the air, and fires five Wave Beams diagonally downwards.

In Kirby: Planet Robobot, King Doo's extra form is known as King Doo 2.0, and he gains another new move. In this attack, King Doo 2.0 will leap across the foreground while firing Wave Beams into the middleground. In addition, he fires two Wave Beams per shot rather than one when he uses his aforementioned attack. 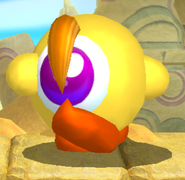 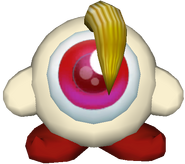