When he appears for the second and final time, his color scheme has changed to a black and gray mix with a cyan shine. His core form now looks exactly like Dark Mind's second form, with the only exception being that it is inside King D-Mind's mouth-stomach. His hammer and halberd's color schemes are replaced with a black and platinum texturing, along with a cyan shine. This appearance is thought to be the villain's true form.

King D-Mind reveals his core.
Add a photo to this gallery

King D-Mind is fought for the last time in the quest called The True Final Battle, which is unlocked for 200 Gem Apples after the previous quest's completion. He is an Ordeal boss in the Toughest category. He attacks using the same techniques from the previous quest, now more powerful and in a different order.

King D-Mind replaces his broken hammer with a halberd like in the previous battle. He uses his halberd attacks from before but gains two new ones (which are reused from Masked Dedede's Revenge and Shadow Dedede): He spins around rapidly with it on the ground for one, and uses his rapid swinging to turn himself into a tornado for the other. He continues to use his physical attacks and core transformation, which now covers more ground with its laser attack.

King D-Mind's core fires a laser.
Add a photo to this gallery

When defeated, King D-Mind falls onto the battlefield. Team Kirby uses magic power to force him back into the black mirror before shattering it.

King D-Mind's name is a portmanteau of "King Dedede" and "Dark Mind," the two characters upon which this villain is based.

King D-Mind is forced back into the black mirror.
Add a photo to this gallery 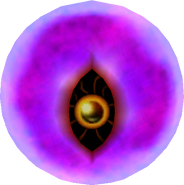 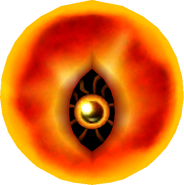