Kirby Wiki
Register
Don't have an account?
Sign In
Advertisement
in: Cancelled or Unreleased Titles, Games, Games with demos, Articles with cancelled or unreleased content
English

Super Nintendo Entertainment System
Kid Kirby is a cancelled title in the Kirby series that would have been released for the Super Nintendo Entertainment System. It was developed by DMA Design Ltd., a Scottish company which eventually evolved into Rockstar North of Grand Theft Auto fame. Had it been released, it would have been the only Kirby series video game to be developed by a non-Japanese studio (with the debatable exception of Kirby Slide).

Very little is known about Kid Kirby. The first hint of the title to be in development was a picture of Kirby with the title "Kid Kirby" at the bottom-right corner of page 47 of a Mexican Club Nintendo Magazine issued in 1995.[1] All other graphic material from this game is from the Flickr account of an ex-DMA game designer named Mike Dailly, who uploaded assets and concept art from the game.

The story, though likely never fully developed,[2] would have followed a younger Kirby who sports a curl of hair and sleeps in a crib. Familiar sights like King Dedede, Bronto Burt, the Star Rod, and the Fountain of Dreams can also be seen, but the rest of the material appears to be unique to this game. Some of this includes a fire spirit, a mole, and an octopus enemy, of which the latter may have been a villain. Promotional material shows both adult and baby versions of King Dedede.

Since no video footage was ever released of the game, information on Kid Kirby’s gameplay is scarce. According to Mike Dailly, the gameplay would use the Super NES Mouse to click and drag to stretch Kirby out, then launch him to progress in the level, in a manner similar to mobile games like Angry Birds.[3]

The game was cancelled by Nintendo eventually due to years of unproductive development.[4] The poor sales of the Super NES Mouse, aside from units bundled with Intelligent Systems' Mario Paint, also may have had an impact on its cancellation. Another potential factor in the game's cancellation may have been that Nintendo preferred to focus on releasing titles for the upcoming Nintendo 64 at the time, rather than the soon-to-be-outdated Super Nintendo (similar to what happened to Star Fox 2). A playable demo was purportedly produced, but has since been lost, also according to Mike Dailly.[3]

According to a Nintendo marketing brochure, Kid Kirby promotional material was intended to be available to retailers in October 1995.[5]

Due to misinformation spread on various video game websites, it was believed that Hard Hat, a boss from the Game Boy game Donkey Kong Land, was intended to appear as an enemy in Kid Kirby.

The confusion began in 2012. An auction revealed images from a 1995 Nintendo Source Book that was given to retailers to promote upcoming releases. Both Donkey Kong Land and Kid Kirby used similar-looking CG artwork and appeared on the same page, with little distinction between the two.[6] This was the only source of Kid Kirby promotional art for years, and due to Donkey Kong Land’s relative obscurity, viewers mistook it for Kirby artwork.[7]

Debate about the character began in 2019, when it was discovered the same artwork had been used in Volume 69 of Nintendo Power, in the pre-release section about Donkey Kong Land.[8] This led some to speculate that Donkey Kong-developer Rare had lent the art to DMA Design. Others identified that it lacked the intricate detail present in accompanying Donkey Kong Land artwork, making the case for Kid Kirby more likely. To further complicate the matter, Hard Hat had other artwork with different features used for the final game.[9]

The case was concluded on July 18, 2019, when a user from the website DK Vine discovered the mysterious art being used in Donkey Kong Land’s instruction manual.[10] 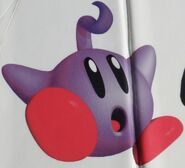 Kirby in his crib 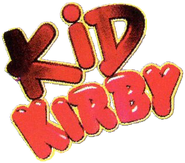 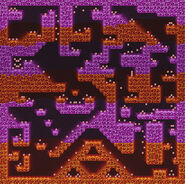